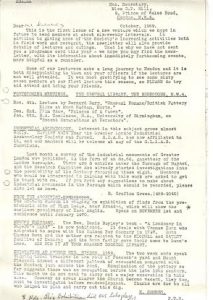 This is the first issue of a new venture which we hope in future to send members at about six-weekly intervals. In addition to giving news of the Society’s increasing activities both in field work and research, the newsletter will also provide details of lectures and outings. That is why we have not sent you a programme card this year – we hope you may find the newsletter, with its information about immediately forthcoming events, more helpful as a reminder.

Some of our lecturers make a long journey to Hendon and it is both disappointing to them and your officers if the lectures are not well attended. It was most gratifying to see some sixty seven members at our first lecture this season, so PLEASE do try and attend and bring your friends.

Interest in this subject grows almost daily. Earlier this year the Greater London Industrial Archaeology Society was formed. H.D.A.S. has now affiliated to it, and our members will be welcome at any of the G.L.I.A.S. functions.

Last month a survey of the industrial monuments of Greater London was published, in the form of an 8s,6d. gazetteer of the London boroughs. There are 8 entries under the Borough of Barnet, and the Research Committee has already started investigations into the possibility of the Society recording these eight. Members who would be interested in helping with this work are asked to get in touch with me. If you have any suggestions to make about industrial monuments in the Borough which should be recorded, please also let me know.

The British Museum is staging an exhibition of finds from the prehistoric site of High Lodge, near Brandon, which will show the earliest prehistory of East Anglia. Opens on NOVEMBER 1st and continues until January 1970. Note this exhibition did not take place

The Rev. Denis Bayley’s book – “A Londoner in Rupert’s Land” – is now published. It deals with Thomas Bunn who emigrated to serve with the Hudson Bay Company in 1797. Both Thomas Bunn and the author are related to the NICHOLL and BAYLEY families of Hendon; and the Bunn family gave their name to Bunn’s Lane. ASK FOR IT AT YOUR NEAREST BOROUGH LIBRARY.

The two week ends spent digging trial trenches in the rear of Peacock’s yard and Mount Pleasant showed a different pattern of occupation compared wit the Paddock just across the road. Examination of the pottery so far suggests there was no occupation before the late 19th century. This means we do not need to carrry out a major excavation in this area. However as areas nearer the Church become vacant, they too, must be investigated before re-development. Thanks are due to all who helped to plan and carry out this dig.

From the Archivist cont… 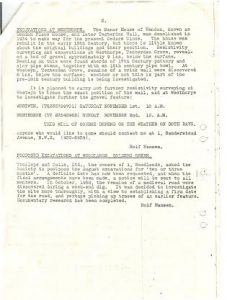 The Manor House of Hendon, known as Hendon Place House, and later Tenterden Hall, was demolished in 1934 to make way for the present Cedars Close. The house was rebuilt in the early 18th Century, but there is little known about the original buildings and their position. Resistivity surveying and excavations at Westhorpe, Tenderden Grove, revealed a bed of gavel approximately 9 ins. below the surface. Resting on this were found sherds of 17th Century pottery and clay stems, together with an 18th century pipe bowl. At Westwyn, Tenterden Grove, remains of a brick wall were discovered 8ins. below the surface; whether or not this is part of the pre-18th century building is being investigated.

It is planned to carry out further resistivity surveying at Westwyn to trace the exact position of the wall, and at Westhorpe to investigate further the gravel feature:

THIS WILL OF COURSE DEPEND ON THE WEATHER ON BOTH DAYS.

Trollope and Colls, Ltd., the owners of 1, Woodlands, asked the Society to postpone the August excavations for ‘two or three months’. A definite date has now been requested, and when the final arrangements have been made, a notice will be sent to all members. In October, 1968, the remains of a medieval road were discovered during a week-end dig. It was decided to investigate the site more thoroughly, with a view to establishing a firm date for the road, and perhaps picking up traces of an earlier feature. Documentary research has been completed.