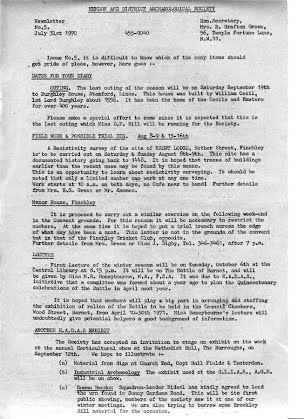 Issue No. 5, it is difficult to know which of the many items should get pride of place, however, here goes : – 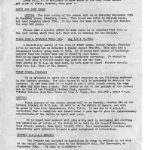 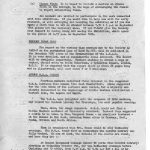 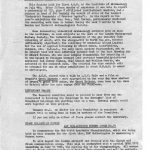 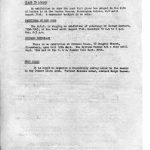 Dates for your diary

Outing. The last outing of the season will be on Saturday September 19th to Burghley House, Stamford, Lincs. This house was built by William Cecil, 1st Lord Burghley about 1556. It has been the home of the Cecils and Exeters for over 400 years. Please make a special effort to come since it is expected that this is the last outing which Miss D. P. Hill will be running for the Society.

Field Work and possible Trial Dig – Aug 8-9 & 15-16th A resistivity survey of the site of BRENT LODGE, Nether Street, Finchley is to be carried out on Saturday & Sunday August 8th-9th. This site has a documented history going back to 1448. It is hoped that traces of buildings earlier than the recent ones may be found by some means.

This is an opportunity to learn about resistivity surveying. It should be noted that only a limited number can work at any one time. Work starts at 10 a.m. on both days, no cafe near to hand! Further details from Mrs. B. G. Green or Mr. Sammes.

Manor House, Finchley It is proposed to carry out a similar exercise on the following weekend in the Convent grounds. For this reason, it will be necessary to restrict numbers. At the same time, it is hoped to put a trial trench across the edge of what may have been a moat. This latter is not in the grounds of the convent but in that of Finchley Cricket Club, opposite. Further details from Mrs. Green or Miss J. Digby.

Lecture The first lecture of the winter season will be on Tuesday, October 6th at the Central Library at 8.15 p.m. It will be on the Battle of Barnet, and will be given by Miss N. B. Honeybourne, MA FSA. It was due to HADAS initiative that a committee was formed about a year ago to plan the Quincentenary celebrations of the Battle in April next year.

It is hoped that members will play a big part in arranging and staffing the exhibition of relics of the Battle to be held in the Council Chambers, Wood Street, Barnet from April 10th-30th 1971. Miss Honeybourne’s lecture will undoubtedly give potential helpers a good background of information.

The Society has accepted an invitation to stage an exhibit on its work at the annual Horticultural show at the Methodist Hall, The Burroughs, on September 12th. We hope to illustrate : –

(a) Material from the digs at Church End, Copt Hall Fields and Tenterden.

(b) Industrial Archaeology – the exhibit used at the GLIAS AGM will be on show.

(c) Roman Hendon. Squadron Leader Rideal has kindly agreed to lend the urn found in Sunny Gardens Road. This will be its first public showing. Members of the Society saw it at one of our winter meetings. We are also trying to borrow some Brockley Hill material for the occasion.

(d) Clay Tobacco Pipes as a number of them have been sent to the Society from various parts of the Borough, for study, we are working on a special exhibit. It is hoped to include an actual demonstration of pipe moulding. Any members who have found clay pipes (especially bowls), in the Borough, should inform the Secretary (Mrs. B. Grafton Green), giving details of the find-spot and if the pipes can be lent for exhibition.

(e) Chance finds. It is hoped to include a section on chance finds in the Borough, in the hope of encouraging the public to report interesting finds.

All members are invited to participate in the work connected with this exhibition. If you would like to help now with the early research, or with arranging and mounting the exhibits; or if you can spare a short time to act as steward between 1.30 p.m. and 6 p.m. on September 12th, please let the Secretary know. If not, PLEASE give the Society your support by coming along and seeing the exhibition, which opens to the public at 3.15 p.m. on September 12th.

The report of the various digs carried out by the Society in 1967-8 on the postulated line of Road No. 167 will be published in the December 1970 issue of the transactions of the L.M.A.S.. It is very detailed and of considerable local interest. The report will be available separately. Members wishing to obtain a copy or copies should write to Brian Robertson. It is expected that the report which is about 25 pages long and is illustrated, will cost about 7 or 8 shillings.

Fourteen members indicated their interest in the suggested WEA lectures this autumn (see last Newsletter). Ideas suggested for the main theme of the lectures were varied, but the majority was clearly interested in the beginnings of Middle Eastern civilisation – Western Asia, the Aegean and Egypt. The WEA were delighted with the response of HADAS members, and booked the Central Library for Thursdays, the most popular evening. Then alas, the snags appeared. WEA could not find a Middle Eastern lecturer of University standard. Instead the suggested a course to be taken by Mrs. Margaret Roxan – an excellent lecturer – on the Romans in the west, covering Roman sites in Germany, Gaul, Spain, Britain and North Africa. It then transpired that Mrs. Roxan could do only Wednesday evenings. The WEA found that on Wednesdays, the Central Library was fully booked. So now at last, the details of the course are clear, and here they are :-

At Hendon Technical College, (about 50 yards from Central Library) starting on Wednesday 7th October, for ten Wednesday evenings before Christmas and 12 after, from 7.30 p.m. to 9.30 p.m. for a fee of Å“2 (because it is a double course, nit the one-term job we first suggested) there will be a course of lectures, lavishly illustrated by slides and given by Mrs. Margaret Roxan on “The Romans in the West”. Middle Eastern parallels will be discussed and the lectures will include many sites that members who holiday on the continent will already know.

We hope that all those who originally expressed interest will enrol, and will enjoy the course. Also that any other members and friends will join. And for those who feel disappointed that the course is nit devoted to Middle Eastern archaeology, we are told that Hendon’s interest in this subject has been clearly brought to the notice of the extra-Mural Department of London University; and that they will do their damnedest as soon as possible to meet the demand.

This Society held its first AGM at the Institute of Archaeology on July 4th. After 15 months of existence, it was able to report a membership of 135, plus 8 affiliated institutional members, and a balance in hand of Å“40 (mainly the result of sales of the booklet “Industrial Monuments of Greater London”). In his report on the year’s activity, Hon. Sec. Paul Carter particularly mentioned the recording work done in Barnet during the last 9 months by HADAS.

Some interesting industrial archaeology exhibits were on show in the vestibule, on such subjects as the work of the London Underground Railway Society; the industrial monuments of the gas industry (the recording of which, with the change-over to North Sea gas, become particularly important); the recording of windmills around London; and the use of applied lettering in street names, inscriptions, plaques, etc. HADAS, the only local society represented, put on an exhibit that had been admirably planned right down to the last drawing pin by Edward Sammes, who was largely responsible for executing it. He was helped by Philippa Bernard (who provided beautifully-lettered captions) and Jeremy Clynes, Rolf Hanson and William Morris, who assisted on the research side. The material for this exhibit will be retained for use at other exhibitions in which HADAS is asked to participate.

The AGM closed with a talk by L. T. C. Rolt and a film on Brunel’s Great Eastern – most appropriate on the very day when another of Brunel’s great iron ships, the Great Britain, came home up the Avon to Bristol after her epic voyage from the Falklands.

The Research committee would be pleased to hear from anyone interested in locating the Buildings on the Boroughs’ list of scheduled buildings and plotting them on a map. Several people could work together on this project.

Vacancy No. 2. An editor for this Newsletter is required. At present, this is being done in turn by members of the Committee.

If you can help in either of these, please contact the Secretary.

RAF Hullavington Museum Cover No. 14 To commemorate the 6th World Aerobatic Championships, which are being held in this country for the first time, RAF Hullavington is sponsoring a Museum cover. It will depict the Siskin aircraft and franked with the Alcock and Brown commemorative stamp. This will be postmarked with a special BFPO 1117 handstamp on July 13th 1970, the opening day of the championships. All covers will be flown aerobatically in a British Team aircraft and will be suitably cacheted. Covers fully serviced 5/- each can be ordered from: Squadron Leader J. F. Harris, RAF Hullavington. P.O. and cheques payable to PSI RAF Hullavington. All profits will be donated to the RAF Museum Appeal Fund.

An exhibition to show the part that glass has played in the life of London is at the London Museum, Kensington Palace W8 until 31st August. A souvenir booklet is on sale

There is an exhibition at Dickens House, 48 Doughty Street, Bloomsbury, open until 12th September. The British Museum has a show until Sept. 13th and at the V & A Museum till Sept. 20th.

It is hoped to organise a resistivity survey later in the season in the Cedars Close area. Further deatils later, contact Rolf Hanson.