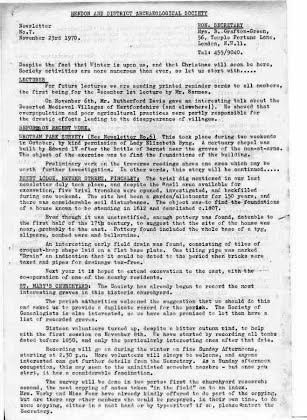 Despite the fact that Winter is upon us, and that Christmas will soon be here, Society activities are more numerous than ever, so let’s start with …..

For future lectures, we are sending printed reminder cards to all members, the first being for the December 1st lecture by Mr. Sammes.

On November 6th, Mr Rutherford Davis gave an interesting talk about deserted Medieval Villages in Hertfordshire (and elsewhere!). He showed that overpopulation and poor agricultural practices were partly responsible for the drastic effects leading to the disappearance of villages

This took place during two weekends in October, by kind permission of Lady Elizabeth Byng. A mortuary chapel was built by Edward IV after the Battle of Barnet near the graves of the men-at-arms. The object of the exercise was to find the foundations of the building. Preliminary work on the traverse readings shows one area which may be worth further investigation. In other words, this story will be continued….

The trial dig mentioned in our last newsletter duly took place, and despite the small area available for excavation, five trial trenches were opened, investigated, and backfilled during one weekend. The site had been a garden/allotments for 150 years, and there was considerable soil disturbance. The object was to find the foundations of a house known to have been standing in 1612 and demolished c. 1807.

Even though it was unstratified, enough pottery was found, dateable to the first half of the 17th century, to suggest that the site of the house was near, probably to the east. Pottery found included the whole base of a tyg, slipware, combed ware and bellarmine. An interesting early field drain was found, consisting of tiles of croquet-hoop shape laid on a flat base plate. One tiling pipe was marked “Drain”, an indication that it could be dated to the period when bricks were taxed and pipes for drainage were tax-free.

Next year, it is hoped to extend the excavation to the east, with the co-operation of one of the nearby residents.

The Society has already begun to record the most interesting graves in this historic churchyard. The Parish authorities welcomed the suggestion that we should do this, and asked us to provide a duplicate record for the parish. The Society of Genealogists is also interested, so we have promised to let them have a list of recorded graves.

Sixteen volunteers turned up, despite a bitter autumn wind, to help with the first session on November 8th. We have started by recording all tombs dated before 1850, and only interesting ones after that date. Recording will go on during the winter on fine Sunday afternoons, starting at 2.30 p.m. More volunteers will always be welcome, and anyone interested can get further details from the Secretary. As a Sunday afternoon occupation, this may seem to the uninitiated somewhat macabre – but once you start, it has a considerable fascination.

The survey will be done in two parts: first the churchyard research; second, the neat copying of notes taken “in the field” on to an index. Mrs. Worby and Miss Fear have already kindly offered to do part of the copying, but are there any other members who would be prepared, in their own time, to do some copying, either in a neat hand or by typewriter? If so, please contact the Secretary.

Digging began at Brockley Hill (Sulloniacae, a Roman Pottery-Kiln site) before the last war and went on, at intervals, until 1954. The finds from these excavations have for many years been stored in the roof annexe of the Hendon Central Library. For over a year, we have been trying to obtain permission to move this material to more accessible storage, where the pottery could be worked on, and studied. Some from the later excavations is still unwashed, unmarked or uncatalogued.

Although the best finds have already been published in various volumes of the Transactions of the London and Middlesex Archaeological Society, much work still needs to be done on the large accumulation of finds from this site. Hopefully, it will be possible to hold an exhibition of part of the material at some later date, now that we have permission from LAMAS to catalogue the finds.

In the future, the finds will be stored in the “cellar” or old dairy of the [[Church Farm Museum]] and the Hampstead Garden Institute, by courtesy of the Central Library authorities and Mr. J. de F. Enderby respectively. Facilities for working on the finds are available at both places. All members are invited to help. Those who already have some experience in dealing with Roman pottery will be particularly welcome, but please do not feel that a lack of knowledge will prevent you from helping. We plan to work at Church Farm Museum on most Saturday afternoons: and to have a pottery session at H.G.S. Institute, if one can be arranged, every alternate second and fourth Tuesday from 7:30 p.m. to 9.30 p.m. Please ring or write to the Secretary and let her know if you are interested and when you would like to help.

Would you like free membership to the London and Middlesex Archaeological Society for a year? We need a representative for the Society to attend the meetings of LAMAS, since we are entitled to send one voting member to all LAMAS lectures, meetings and visits. LAMAS meetings are held on one Friday each month at 6.30 p.m. at the Bishopsgate Institute. Next month’s lecture, on December 11th, is on London Bridge from Roman times till today. Visits are on Saturdays. There is one to Sutton Hoo Ship Burial at the British Museum on 16th January, 1971.

If you are interested, please ring Mrs. Grafton Green – she will supply a copy of the programme and any other details needed.

Thanks for the good response to the questionnaire. From the information we received, we will try to cater for the varied interests in the Society

All that remains now is for me to wish everyone A HAPPY CHRISTMAS and GOOD LUCK IN THE NEW YEAR. 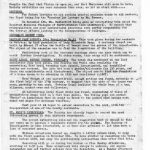 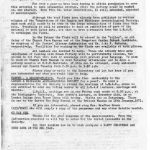