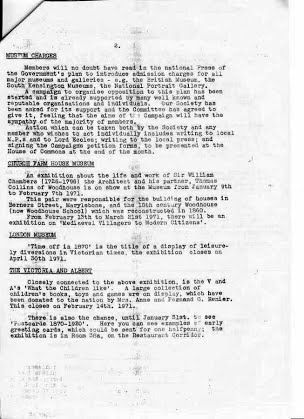 On behalf of the Society, the Editor hopes all our members have a |prosperous New Year. At the moment, there are numerous lectures and exhibitions in the offing and I hope that the ones mentioned will interest members.

Firstly the Society’s lectures. On January 5th, 30 people braved the cold to come and hear a talk by Mr. Philip Dixon on “Greenwich Tudor Palace”. We hope to see as many members as possible, plus friends on February 2nd when Dr. Michael Day will be speaking on The emergence of Man.

As one of the Winter Lectures in the Barnet Libraries, Mr. Peter Marsden from the Guildhall Museum is giving a talk on Recent Discoveries in Roman and Medieval London. This will be held on Wednesday 7th February at North Finchley Library.

Arrangements to move this material to new storage places in Church Farm Museum and Hampstead Garden Suburb have been held up but it is hoped that they will be completed soon. When this has been done, the Society can go ahead with plans to work on the material. The days allotted for this are:-

i) the second and fourth Tuesday in each month; 7.30-9.30 p.m. at Hampstead Garden Suburb Institute,

Those members who have already volunteered to help will be informed as soon as work is ready to start. More volunteers will be very welcome, so if you can help, please send the Secretary your name.

Recording of inscriptions on the tombstones was carried out on five weekends before Christmas. The area between the footpath and Church Terrace has now been fully recorded and work is now being done on the area north of the church. The recording hopes to be continued as soon as the weather is a bit warmer. Willing recorders will meet on Sundays at 2.30 p.m. in the churchyard. They are advised to warp up well, because to put it mildly, the whole area is very cold and damp.

This annual event, organised by the London & Middlesex Archaeological Society, will take place in the Livery Hall of the Guildhall on March 27th 1971. There are four or five talks during the afternoon on recent excavations in the London area; an excellent tea; and a chance to look round some of the stands showing work of local Societies. This year, HADAS has obtained exhibition space and we hope that many members may decide to attend. For further details, please write to Mr Roy Canham at the London Museum, Kensington Palace, W8.

Members will no doubt have read in the National Press of the Government’s plan to introduce admission charges for all major museums and galleries, e.g. the British Museum, the South Kensington Museums and the National Portrait Gallery. A campaign to organise opposition to this plan has been started and is already supported by many well-known and reputable organisations and individuals. Our Society has been asked for its support and the Committee has agreed to give it, feeling that the aims of the campaign will have the sympathy of the majority of the members.

Action which can be taken both by the Society and any member who wishes to act individually includes writing to local M.P.s and to Lord Eccles; writing to the local press; and signing the Campaign’s petition forms, to be presented at the House of Commons at the end of the month.

An exhibition about the life and work of Sir William Chambers (1726-1796) the Architect and his partner, Thomas Collins of Woodhouse is on show at the Museum from January 9th to February 7th 1971. This pair were responsible for the building of houses in Berners Street, Marylebone, and the 18th century Woodhouse (now Woodhouse School) which was reconstructed in 1860.

From February 13th to March 21st 1971, there will be an exhibition on Medieval Villagers and Modern Citizens.

“Time off in 1870” is the title of a display of leisurely diversions in Victorian times. The exhibition closes on April 30th 1971.

The Victoria and Albert

Closely connect to the above exhibition is the V & A ‘What the children like’. A large collection of children’s books, toys and games are on display, which have been donated to the nation by Mrs. Anne and Fernand G. Renier. This closes on February 14th 1971.

There is also a chance until January 31st to see “Postcards 1870-1920”. Here you can see examples of early greetings cards, which could be sent for one halfpenny; the exhibition is in Room 38a on the Restaurant corridor.

This year, the Society is ten years old. The first entry in the HADAS Minute Book is dated May 4th 1961. It reports, among other things, a membership on 25, with 17 members already paid up.

What better way to celebrate achieving double figures than to launch out on a totally new venture? HADAS now enjoying a membership of nearly six times that of 1961, is about to produce its own publications something that most local organisations consider to be he final accolade of success.

As past newsletters have mentioned, HADAS has from the outset participated in (indeed, we initiated) the plans for commemorating the 500th anniversary of the Batlle of Barnet next April. At the Quincentenary Exhibition from April 10-30, there will be a bookstall. This provides a golden chance for launching the first HADAS booklet on some subject connected with the battle. The 5,000 word booklet wil cost between £30 and £40 to produce. We feel sure that every HADAS member will want to buy one. There is a further way in which some members may care to help the Society. This is by underwriting part of the initial cost of publication.

If you would like to be associated with this new venture, will you to lend the Society £3 for one year, less if you can not manage so much, towards the printing costs? If the publication is a success, the whole loan will of course be returned to you; if it makes a loss, the return will only be proportionate. Anyone prepared to act as a guarantor should contact Mrs. Isaaman. 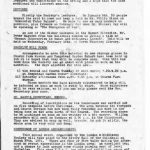 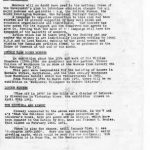 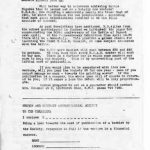