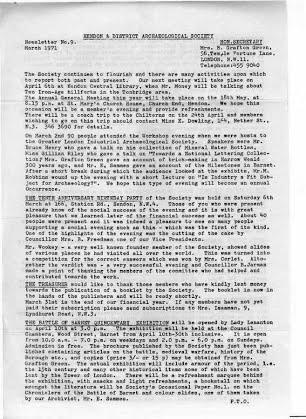 The Society continues to flourish and there are many activities upon which to report, both past and present.

Our next meeting will take place on April 6th at Hendon Central Library, when Mr. Money will be talking about two Iron-age hill forts in the Tonbridge area.

The Annual General Meeting this year will take place on the 18th May ay 8.15 p.m. at St. Mary’s Church House, Church End, Hendon. We hope this occasion will be a members’ evening and provide refreshments.

There will be a coach trip to the Chilterns on 24th April and members wishing to go on this trip should contact Miss E. Dowling for details. This is an experiment and is being specially organised for our Society by Mr. Paul Carter of the Greater London Industrial Archaeology Society. This trip is guaranteed to be most enjoyable and will be more or less a “mystery” trip. Don’t forget to support this event and telephone or write to Miss E. Dowling.

On March 2nd, 90 people attended the Workshop evening when we were hosts to the Greater London Industrial Archaeological Society. Speakers were Mr. Bruce Henry who gave a talk on his collection of mineral water bottles, Miss Gillian Riley who gave a talk on ”Towards a National Lettering Collection”; Mrs. Grafton Green gave an account of brick making in Harrow Weald 300 years ago, and Mr. E. Sammes gave an account of milestones in Barnet. After a short break during which the audience looked at exhibits, Mr. M. Robbins wound up the evening with a short lecture on “Is Industry a fit subject for Archaeology?” We hope this type of evening will become an annual occurrence.

This was held on Saturday 6th March at 166 Station Road, Hendon, NW4. Those of you who were present already know of the social success of the evening and it is with great pleasure that we learned later of the financial success as well. About 40 people were present and it was indeed a pleasure to see so many people supporting a social evening such as this – which was the first of its kind. One of the highlights of the evening was the cutting of the cake by Councillor Mrs. B. Freedman, one of our Vice Presidents.

Mr Wookey, a well-known founder member of the Society, showed slides of various places he had visited all over the world. This was turned into a competition for the correct answers, which was won by Mrs. Corlet. Altogether the verdict was – a very successful evening and Councillor B. Jarman made a point of thanking the members of the committee who had helped and contributed towards the work.

The Treasurer would like to thank those members who have kindly lent money towards the publication of a booklet by the Society. The booklet is now in the hands of the publishers and will be ready shortly.

March 31st is the end of our financial year. If any members have not yet paid their subscription, please send them to Mrs. Isaaman.

The Battle of Barnet Quincentenary Exhibition

This will be opened by Lady Lenanton on April 10th at 3.00 p.m. The exhibition will be held at the Council Chambers, Wood Street, Barnet from April 10th-30th inclusive. It is open from 10.00 a.m. – 7.00 p.m. on weekdays and 2.00 p.m. – 6.00 p.m. on Sundays. Admission is free. The brochure published by the Society has just been published containing articles on the battle, medieval warfare, history of the borough, etc., and copies (price 3/- or 15p) may be obtained from Mrs. Grafton Green.

The actual exhibition will include armour from the period, i.e. the 15th century, and many other historical items some of which have been lent by the Tower of London.

There will be a refreshment marquee behind the exhibition, with snacks and light refreshments, a bookstall on which amongst other literature will be the Society’s Occasional Paper No. 1 on the Chroniclers of the Battle of Barnet and coloured slides, one of them taken by our archivist, Mr. E. Sammes.

The finds from the digs at Brockley Hill, near Stanmore, the Roman pottery kiln-site of Sulloniacae are now being catalogued and re-studied at Hampstead Garden Suburb Institute by interested members of the Society on the second and fourth Tuesdays of each month (including Easter Tuesday). It is hoped soon to start Saturday afternoon work at Church Farm Museum.

Recording is being done both photographically and by filling in street survey forms. Members interested in helping with either the street survey or the pottery sessions are asked to get in touch with Mrs. Grafton Green.

The Conference of London Archaeologists

This will take place in the Livery Hall of Guildhall on March 27th. Doors open at 2.00 p.m. to allow a chance to see the many exhibits (HADAS will be represented this year); talks begin at 2.30 p.m. Tickets (including tea) for members of LAMAS 25p; non-members 40p, obtainable from Mrs. Grafton Green.

Speakers will include Harvey Sheldon on excavations at London Bridge; Graham Dawson on a Delft-war kiln at Montagu Close, Southwark; Peter Drewitt on excavations in Croydon Old Town; Philip Dixon on the Tudor Palace at Greenwich. Three of these four have talked to our Society in recent years, Mr. Dixon in January last.

After tea, Dr. John Alexander will talk about the aims of RESCUE, the new archaeological society which has been formed to try and save threatened sites all over the country.

This is the probable name of a historical society formed recently in Finchley by Miss Jean Scott, GLC councillor of the London Borough of Barnet, with the objects of recording worthwhile buildings, open spaces, tress, etc. in the old parish of Finchley. The second meeting will be held on Friday March 26th at the old Parish Hall of St. Mary’s Church, Church End, Finchley, N3 at 8.00 p.m. Finchley members of HADAS may be interested in joining – subscription will be 30p until the end of 1971.

These and Pink stamps are still being collected by the Society, and if members have any to spare, they should be sent to Mrs. Isaaman.

If any members have an interest in any aspect of archaeology and would like to gice a short talk about it at the Annual General Meeting on 18th May (mentioned earlier in this Newsletter) they may get in touch with Miss E. Dowling. As it will only be possible to accommodate two or three people to speak during the evening, it will be a matter of “first come, first served”.

The lectures on “The Romans in the West” will go on for a second year next winter, starting Wednesday 6th October at Hendon Technical College. A few new students can still be admitted. As a result of this success, WEA are organising a Hendon Branch – the inaugural meeting will be in Lecture Theatre A18 at Hendon Technical College on March 31st 1971 at 7.30 p.m. All are welcome. 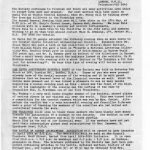 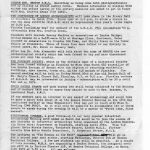