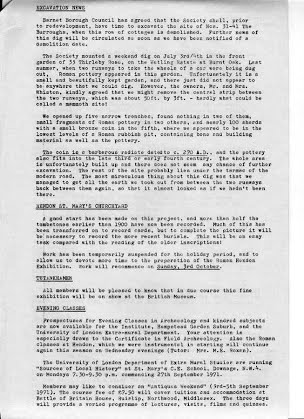 We must apologise for the gap which suddenly appeared in our newsletters, due, we are afraid, to too many holidays among the Editorial Committee! This newsletter should have come out to you at the end of July, but although it arrives a month late, we hope to catch up at the end of September. Thereafter, we’ll revert to the usual two-monthly intervals.

18th September 1971. – The Society’s last outing of the summer. This will be to Battle Abbey – with various interesting things to see en route, among them Beeches Farm, a 16th century tilehung farmhouse. Full details are enclosed on a separate sheet, which we hope you will fill in and post off to Liz Dowling as soon as possible.

Please note change of venue St. Mary’s Church House, Church End, Hendon, NW4 (owing to the rebuilding of Central Library, we shall stay there all winter.) Change of day – meetings take place on the THIRD Tuesday of each month; usual time – 8.15 p.m.

First Lecture – Tuesday 19th October, when Harvey Sheldon will talk about “Excavations in Highgate Woods” and bring us up to date with the latest discoveries at the Roman kiln site there. 8.15 p.m. at St. Mary’s Church House.

Subsequent lectures will take place on Tuesdays at 8.15 p.m. as follows:-

The Programme Committee would like to hear from a y member who would be willing to give an occasional vote of thanks at the winter meetings. Please phone or write to Miss E. Dowling.

Another important date for your diary is September 4th – the opening of the Society’s exhibition on Roman Hendon at Church Farm Museum. The exhibition goes on until October 10th, but we hope members will visit it early and then come back for a second look. Please encourage your friends to come along too.

Seventeen members of the Society have worked to produce the exhibition, which covers both sites and chance finds in various parts of Hendon. We have permission to steward the exhibition at weekends and hope to have two members there regularly every Saturday (morning and afternoon) and Sunday (afternoon only) to answer questions and, when appropriate, do a little publicity for the Society. If you would like to help in this way, please give Mrs. Grafton Green a ring and tell her what time you can spare.

Barnet Borough Council has agreed that the Society shall, prior to redevelopment, have time to excavate the site of Nos. 31-41 The Burroughs, when this row of cottages is demolished. Further news of this dig will be circulated as soon as we have been notified of a demolition date.

The Society mounted a weekend dig on July 3rd/4th in the front garden of 33 Thirleby Road on the Watling Estate at Burnt Oak. Last summer, when two runways to take the wheels of a car were being dug out, Roman pottery appeared in this garden. Unfortunately it is a small and beautifully kept garden, and there just did not appear to be anywhere that we could dig. However the owners, Mr. & Mrs. Whiston, kindly agreed that we might remove the central strip between the two runways, which was about 50 ft. by 3 ft. – hardly what could be called a mammoth site.

We opened up five narrow trenches, found nothing in two of them, small fragments of Roman pottery in two others, and nearly 100 sherds with a small bronze coin in the fifth, where we appeared to be in the lowest levels of a Roman rubbish pit, containing bone and building material as well as the pottery. The coin is a barbarous radiate dated to c. 270 A.D. and the pottery also fits into the late third or early fourth century. The whole area is unfortunately built up and there does not seem any chance of further excavation. The rest of the site probably lies under the tarmac of the modern road. The most miraculous thing about this dig was that we managed to get all the earth we took out from between the runways back between them again, so that it almost looked as if we hadn’t been there.

A good start has been made on this project, and more than half of the tombstones earlier than 1900 have now been recorded. Much of this has been transferred onto record cards, but to complete the picture, it will be necessary to record the more recent burials. This will be an easy task compared with the reading of older inscriptions! Work has been temporarily suspended for the holiday period, and to allow us to devote more time to the preparation of the Roman Hendon Exhibition. Work will recommence on Sunday 3rd October.

All members will be pleased to know that in due course this fine exhibition will be on show at the British Museum.

Prospectuses for Evening Classes in Archaeology and kindred subjects are now available for the Institute, Hampstead Garden Suburb, and the University of London Extra-mural Department. Your attention is especially drawn to the Certificate in Field Archaeology. Also the Roman classes at Hendon, which we were instrumental in starting, will continue again this season on Wednesday evenings (tutor – Mrs. M. E. Roxan).

Members may like to consider an “Antiques Weekend” (3rd – 5th September 1971). The course fee of £7.50 will cover tuition and accommodation at Battle of Britain House, Ruislip, Northwood, Middlesex. The three days will provide a varied programme of lectures, visits, films and quizzes. 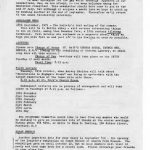 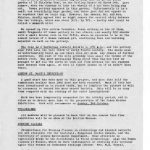