The next meeting will be on 18th January at St. Mary’s Church House when Mr. W. J. Smith will speak about the GLC archives, particularly those documents which may be interesting to research workers in the Borough of Barnet.

The last newsletter mentioned the problem of a December meeting on the third Tuesday of the month, i.e. 21st December, being perilously near to Christmas. At first, consideration was given to bringing the meeting forward by a week, but unfortunately that has proved impossible. The committee has therefore decided to cancel the December meeting altogether and instead to add an extra meeting in the spring. Very opportunely, the Hampstead branch of the Historical Association suggested that we might care to join them in sponsoring a lecture on the Tomb of Tutankhamun by Mr. T. C. E. James. This we have accordingly agreed to do.

Both we and the Historical Association are now trying, in order to provide a suitable hall, to estimate how many members are likely to attend this meeting, which will be in March or April next (exact date not yet settled). We feel the lecture should prove particularly popular because of the British Museum exhibition on Tutankhamun which is due to start about the same time. It would therefore be most helpful if those members who feel they are likely to want to come will either write or telephone the editor (Mrs. Christine Arnott) and tell her (a) whether they would like to attend and (b) whether they would be equally happy if the lecture were arranged say at a hall in Golders Green or at Westfield College, Kidderpore Avenue, Hampstead. These are two venues that have been suggested but if they are not popular with a majority of members, we will think again.

Many thanks to those members who wrote or telephoned to the Hon. Secretary about the Blue Plaques of Barnet. We have now collected a list of 21 of these (not all of which have been verifies as still being in situ). Twenty were put up by the old Hendon Corporation and one by the GLC.

By the time this newsletter reaches you, we will have held a meeting at 166 Station Road for all those members who have indicated, by filling in one the Society’s questionnaires, that they are interested in field work. The object of the meeting is twofold. – to introduce the Research Committee Chairman, Edward Sammes, to the large number of new field workers who have joined the Society in the last year; secondly, to enable him to outline three new projects which the Society hopes to undertake, all of which call for organised field work in the way of surveys, observation of buildings and development plans, etc.

Earlier this autumn, a meeting was held for those who had stated a particular interest in doing documentary research. As a result, several new lines of research were opened. The facts gained from the Society’s questionnaire forms are thus proving most useful, not only as an indication of the most popular subjects for lectures, but also as a means of alerting members with special interests. Some members however have never filled in the questionnaire. This means that there is an incomplete record of their interests, and it might be that occasionally they will miss some event which they would have liked to have attended. If YOU have never filled in an HADAS questionnaire, and would like to do so, please let Mrs. Grafton Green know and she will be happy to send you one.

A national survey of portraits in private hands is being organised county by county. The object is to record such portraits, and to place the records in the archives of the National Portrait Gallery. When complete, this would mean that any student or research worker applying for information could be told exactly which portraits were available of the person in whom he was interested, and where they could be seen.

The London and Middlesex Archaeological Society is organising this work for Middlesex, and has asked HADAS to undertake the survey of the Borough of Barnet. The phrase “in private hands” includes portraits (not only of famous people, but of everyone) in institutions. Hospitals, regimental HQs, schools etc. are particularly rich sources for portraits or local worthies.

Two members, Clive and June Eyre, have kindly agreed to organise a small group to start on this long-term project, and already other members have offered to help. If you feel you can give a little time to this, please do let Mrs. Grafton Green know.

This Society brings to our notice a survey of street names that is being embarked on by the Names Society. It is aimed at compiling a bibliography of books and articles devoted to the origins and derivations of street names, and with notes on origins. It is hoped that some member or members of our own society will be willing to undertake such work in our area. Detailed particulars of the scheme can be obtained from the Names Society. Please let Mrs. Grafton Green know if you are interested.

Mr. K. A. Bailey of Putney has recently begun work on studying the field systems and agricultural history of Surrey. He would be very glad to know of any research work which has been or is being conducted by local history societies in Middlesex, an area which may have some similarity with Surrey.

Lastly, we must wish all our members a very happy Christmas, and hope that ion the New Year they will all be ready to join in the fresh ventures of the Society that are being planned for them, with renewed strength after the seasonal festivities. 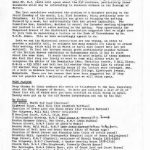 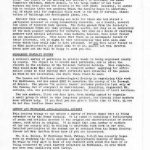