Those of you who were unable to take part in the Social Evening on 10th March missed a very friendly and enjoyable gathering. It was a disappointment not to see more of the younger members of the Society. Owing to the generosity of those who donated prizes for the various competitions, many present were able to leave bearing “gifts”. Very hard work on the part of the organisers earned praise for the catering.

Together with this letter comes notice of the Annual General Meeting for 16th May. Please do come and let your views be known to the Committee. Ideas for outings, lectures and other activities will be warmly welcomed; there are many items on the agenda that we hope will provoke lively discussion.

Owing to the lecturer being detained abroad, the Programme Committee had to arrange for a substitute lecturer at short notice for Tuesday 18th April 1972. They have managed to obtain the services of the National Trust lecturer, Mrs. MacGregor to give an illustrated talk on “The History of our Coastlands, with special reference to Enterprise Neptune”. Please do come.

The last meeting, on Tuesday 28th March, was fairly well attended, when Mr. Graham Dawson gave a very detailed account of the excavations in Lambeth and Southwark of the Delftware kilns. The talk was accompanied by numerous coloured slides. Mrs. Grafton Green chaired the meeting and Martin Long gave a vote of thanks.

At last we have final arrangements for the lecture on the Tomb of Tutankhamun which Mr. T. G. H. Jones is going to give us and the Historical Association. This will be at Westfield College, Kidderpore Avenue, NW3 at 8 p.m. on Wednesday 24th May 1972. Kidderpore Avenue is just off Platts Lane, the road that leads from Finchley Road towards Hampstead; just the other side of Finchley Road from the exit of Hendon Way down which the 113 bus comes from Hendon Central. Buses also come along Finchley Road from Golders Green Station (2 and 13).

With this letter, you will receive details of the outing to Coventry Cathedral on 20th May. You make like advance news of the all-day outing to East Anglia on 10th June, when a visit will be made to Grimes Graves (for those wishing to be agile!) as well as many other places of interest in Brandon and Thetford. On 15th July, there is a visit to the Dolphin Sailing Barge Museum at Sittingbourne; and on September 9th, a further outing with a specially archaeological slant is being arranged.

Saturday 19th August at 2.15 p.m. John Cresswell will conduct “Strand Looping” for the Society and the London History Society. Meet at 2.15 p.m. at London Bridge Underground Station. Bring Wellingtons and old clothes as this involves walking along the Thames mud at low tide.

In connection with the Festival of London, Mr. Jeffrey Evans is conducting three walks as follows :-

Mr. J. Enderby is also conducting a walk for the Festival on July 2nd on “Historic Buildings in the Suburb” – meeting at 2.30 p.m. at the Institute, Central Square, NW11 and returning to the Tea House at 3.45 for a short illustrated lecture on the history of the suburb. Tea, at 4.15, kindly provided By the Institute Society.

Brockley Hill. As members will know from the Roman Hendon exhibition of last September, excavation has been going on again sporadically at Brockley Hill since 1968. (The first series of digs, under the London and Middlesex Archaeological Society, were from 1947-1955.) Members of the Watford and South Herts group have, by permission of the Royal National Orthopaedic Hospital, investigated an area within the hospital grounds (which lie along the west side of the A5 at the top of Brockley Hill) where alteration or development was going to take place.

Last month the same group obtained permission to dig on the east side of the A5 (not on hospital land). They have put down several trenches just by the place where stands the Hendon Borough Council blue plaque commemorating the site of the Roman station of Suulonaicae, close to the area of the 1947 dig. So far they report finding much disturbance in the area, with 18th century and 1st century Roman material mixed.

The dig is a small one, under the direction of Stephen Castle, of the Coins and Medal department of the British Museum. Mr. Castle, who will be digging at weekends until May 14, has sufficient volunteers; but he would be happy to show the site to any members of the Society any weekend.

Earlier this year, a field belonging to Edgwarebury Farm, also at the top of Brockley Hill on the east of the A5, came under the plough for the first time in many years. Substantial evidence of Roman pottery was seen in the plough soil, and indications of three possible kiln areas. The London and Middlesex Archaeological Society has been asked to apply to the Department of the Environment to mount a full-scale dig in this area in the autumn, when the barley now growing in the field will have been harvested. If this plan goes ahead, it would probably mean a full-time dig of several weeks. We will keep members posted about the plans as volunteers from our Society may be called for.

A row of six small houses, probably built near the beginning of the last century, is at present being demolished on this site. Barnet Borough Council have kindly given permission for the Society to excavate there at weekends as soon as demolition is complete.

The earliest map of the area (c, 1597 from the archives of All Souls College, Oxford) does not show buildings on the site, but there are possibly buildings there on the Crow map of 1754. In any case, the site is so close to the heart of the old village of Hendon that we felt that it should be investigated fully while that is still possible.

It is hoped that digging may start towards the end of this month. Volunteers are urgently needed. All members who can spare time either in the weekend of April 29-30 or during any weekend in May are asked to let Mrs. Grafton Green know as soon as possible.

Members may like to know that Penguin have recently published “The Penguin Dictionary of Archaeology” for 50p, edited by Warwick Bray and David Trump. In view of the increased interest in Egypt, Penguin re-issued “The Pyramids of Egypt” by I. E. S. Edwards and “Archaic Egypt” by Walter B. Emery, both at 50p. 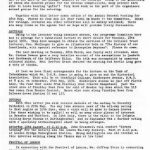 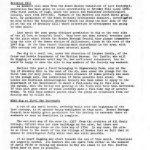