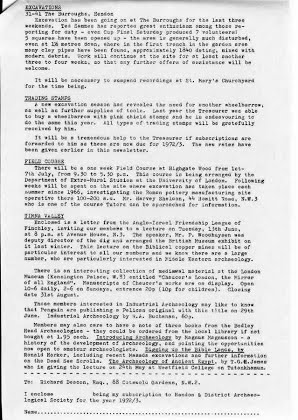 This was held on 16th May 1972 at St. Mary’s Church House. The Chairman being unavoidably absent, hi s report was read in which he gave the latest details of the Society’s membership – an increase of 38 over the previous year. He reported a year of continued success, apart from the ever present financial problems and the adjustments necessitated by the change of hall for lectures. It was to be hoped that the current programme of outings would prove popular and be well supported.

The meeting agreed to a resolution that the annual subscription to the Society should be raised. The new rates are – Members over 18 years; £1.00, Members under 18 years: 65p; Members over 60 years: 75p. It is possible that non-members attending functions may be charged a small fee.

Councillor Mrs. Freedman, a vice-chairman of the Society, presided over the meeting with a light touch that set the tone for the evening that everyone seemed to enjoy very much. After coffee and biscuits, Ryamond Lowe showed some colour slides to test our knowledge of things Roman.

The following officers were elected: –

Details of the next outing, to Grimes Graves on June 10th, are enclosed. This is the first of our new-style outings which are intended to be mainly archaeological, rather than historical, and we hope very much that members will support it. It is hoped to see something of every archaeological period from Neolithic through to Saxon.

Excavation has been going on at The Burroughs for the last three weekends. Ted Sammes has reported great enthusiasm among those reporting for duty – even Cup Final Saturday produced 7 volunteers! 5 squares have been opened up – the area is generally much disturbed, even at 1 ½ meters down, where in the first trench in the garden area many clay pipes have been found, approximately 1940 dating, mixed with modern b=debris. Work will continue at the site for at least another three to four weeks, so that any further offers of assistance will be welcome.

It will be necessary to suspend recordings at St. Mary’s Churchyard for the time being.

A new excavation season has revealed the need for another wheelbarrow, as well as further supplies of tools. Last year, the Treasurer was able to buy a wheelbarrow with pink shield stamps and he is endeavouring to do the same this year. All types of trading stamps will be gratefully received by him.

It will be a tremendous help to the Treasurer if subscriptions are forwarded to him, as these are now due for 1972/3. The new rates have been given earlier in this newsletter.

There will be a one week field course at Highgate Wood from 1st-7th July, from 9.30 – 5.30 p.m. This course is being arranged by the Department of Extra-Mural Studies at the University of London. Following weeks will be spent on the site where excavation has taken place each summer since 1966, investigating the Roman pottery manufacturing site operative there 100-200 a.d. Mr Harvey Sheldon, who is one of the course tutors, can be approached for information.

Enclosed is a letter from the Anglo-Israel Friendship League of Finchley, inviting our members to a lecture on Tuesday 13th June, at 8 p.m. at Avenue House, N3. The speaker, Mr. P. Woodhuysen, was deputy director of the dig and arranged the British Museum exhibit on it last summer. This lecture on the Biblical copper mines will be of particular interest to all our members and we know there are a large number, who are particularly interested in Middle Eastern archaeology.

There is an interesting collection of Medieval material at the London Museum (Kensington Palace, W8) entitled “Chaucer’s London, Mirror of all England”. Manuscripts of Chaucer’s work are on display. Open 10-6 daily, 2-6 on Sundays, entrance 20p (10p for children). Closing date 31st August.

Members may also care to have a note of three books from the Bodley Head Archaeologies – they can be ordered from the local library if not bought for £1.95 each.

“Introducing Archaeology” by Magnus Magnusson – a history of the development of Archaeology, and pointing the opportunities now open to amateur archaeologists.

“Digging up the Bible Lands” by Ronald Harker, including recent Masada excavations and further information on the Dead Sea Scrolls.

“The Archaeology of Ancient Egypt” by T. G. H. James who is giving the lecture on May 24th at Westfield College on Tutankhamun. 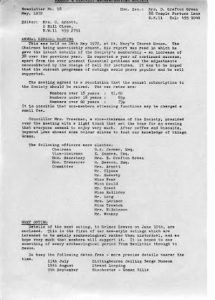 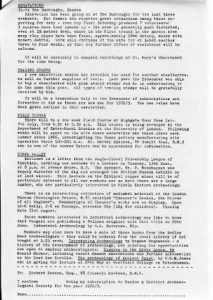