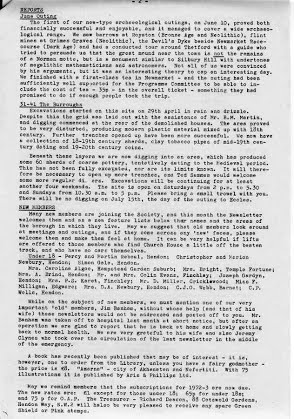 It is encouraging that we can report that there has been good support for recent outings. A short account of the Grimes Graves visit in included in this newsletter.

It is hoped that a good number will be able to join the 15th July party that will visit the Roman villa at Eccles, near Tunbridge, and after a picnic lunch, the Sailing Barge Museum at Sittingbourne.

Please keep a note in your diary of the 9th September outing to Winchester, where a varied programme is being arranged, including a visit to the Roman villa at Sparsholt, the City Museum and the special exhibition at the Cathedral.

Don’t forget “Strand Looping” – a walk to search along the river mud (meeting at 2.15 p.m. at London Bridge Underground Station on August 19th). This will be conducted by John Cresswell and the London History Society. Please bring Wellingtons and old clothes.

It is possible that an outing to view the excavations at Dover mounted by the “Rescue” team might be arranged for 12th August. It would be essential to let Mr. Martin Long know immediately if members are interested, so that he could make arrangements for a coach booking. The committee thought members might like an opportunity to view this excavation in view of the “Rescue” lecture given last winter, and the value of the knowledge that is being gained from the investigation. Proof is emerging of the site of the Classis Britannica fort.

Many members have been enjoying the walks arranged along the river by Mr. J. Evans; it is hoped that he will lead a walk along the final section in the autumn, towards the source near Arkley.

A great deal of effort has gone into making possible the participation of the Borough of Barnet in these events, and the Society has been playing its part. The contribution has been twofold – history walks and exhibitions. Mr. Jeffrey Evans kindly organised three history walks on the Society’s behalf, and they proved very popular; a river walk, a walk around Hendon (including a visit to our own dig) and another around Mill Hill. Mr. Enderby, at the Society’s suggestion, compered a walk around the Hampstead Garden Suburb.

A photographic exhibition of the Historic Buildings of Barnet was arranged by Ted Sammes and Jeremy Clynes. This was mounted on stands and has been moved weekly around the borough. From 24th June to 8th July, it will be on show at the Tea House, Northway, Hampstead Garden Suburb during the day and evening. At the same place is another exhibition by the Society on the history of the Garden Suburb, with photographs and documents, showing the origins of the famous estate and throwing a few sidelights on its equally well-known founder, Henrietta Barnett – the formidable “Dame”. This was a co-operative exercise by a number of members, including Philippa Bernard, Christine Arnott, Enid Hill, Brigid Grafton Green, William Morris, Eric Grant, Ted Sammes, Jeremy Clynes and John Enderby.

June outing. The first of our new-type archaeological outings, on June 10, proved both financially successful and enjoyable, and it managed to cover a Wide archaeological range. We saw barrows at Royston (Bronze Age and Neolithic), The Devil’s Dyke beside Newmarket Racecourse (Dark Age) and had a conducted tour around Thetford with a guide who tried to persuade us that the great mound in the town is NOT the remains of a Norman motte, but a monument similar to Silbury Hill with undertones of megalithic mathematicians and astronomers. Not all of us were convinced by his arguments, but it was an interesting theory to cap an interesting day. We finished with a first-class tea in Newmarket – and the outing had been sufficiently well supported for the Programme Committee to be able to include the cost of tea – 35p – in the overall ticket – something they had promised to do if enough people took the trip.

31-41 The Burroughs – Excavations started on this site on 29th April in rain and drizzle. Despite this, the grid was laid out with the assistance of Mr. B. M. Martin, and digging commenced at the rear of the demolished houses. The area proved to be very disturbed, producing modern plastic material mixed up with 18th century. Further trenches opened up have been more successful. We now have a collection of 18-19th century sherds, clay tobacco pipes of mid-19th century dating and 19-20th century coins.

Beneath these layers, we ar now digging into an area, which has produced some 60 sherds of coarse pottery, tentatively dating to the Medieval period. This has not been fully excavated, nor are its limits known. It will therefore be necessary to open up more trenches, and Ted Sammes would welcome some more regular diggers. Excavations will be continuing for at least another four weekends. The site is open on Saturdays from 2 p.m. to 5.30 and Sundays from 10.30 a.m. to 5 p.m. Please bring a small trowel with you. There will be no digging on July 15th, the day of the outing to Eccles.

Many new members are joining the Society, and this month the Newsletter welcomes them and as a new feature lists below their names and the areas of the borough in which they live. May we suggest that old members look around at meetings, and if they come across any new faces, please welcome them and make them feel at home. It can be very helpful if lifts are offered to those members who find Church House a little off the beaten track, and who have no cars themselves.

While on the subject of new members, we must mention one of our very important “old” members, Jim Banham, without whose help (and that of his wife) these newsletters would not be addressed and posted off to you. Mr. Banham was taken off to hospital last month at short notice, but after an operation, we are glad to report that he is back home and slowly getting back to normal health. We are very grateful to his wife, and also Jeremy Clynes who took over circulation of the last newsletter in the middle of the emergency.

A book has recently been published that may be of interest to you – it is, however, one to order from the library, unless you have a fairy godmother – the price is £8. “Amarna” – city of Akhanaten and Nefertiti. With 75 illustrations., it is published by Aris and Phillips Ltd.

May we remind members that the subscriptions for 1972-3 are now due. The new rates are: £1 except for those under 18; 65p for under 18s; 75p for O.A.P. The Treasurer – Richard Deacon, will also be pleased to receive any spare Green Shield or Pink Stamps. 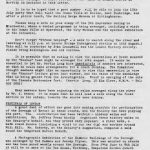 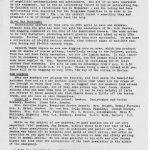