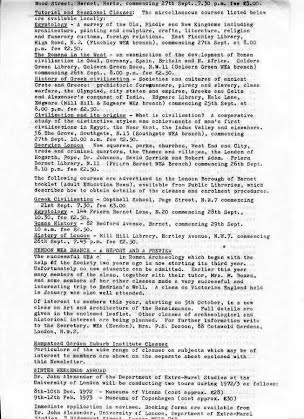 River Walk: Mr. Jeffrey Evans will be leading the next in his series of walks northwards along the River Brent towards its source on Saturday 23rd September. Meet at Totteridge & Whetstone Underground Station at 2.30 p.m. A member has kindly offered to provide tea for intrepid explorers after the walk! FOOTNOTE – The final walk in the series has been provisionally scheduled to take place next spring.

The dates for the Society’s 1972/3 Winter programme are as follows : –

Details will be announced in later Newsletters. The venue for lectures will once again be St. Mary’s Church Hall, Church End, Hendon, NW4 as the Public Library is still closed for modrenisation, and the time remains unchanged at 8.15 p.m.

The discovery of footings of a house pre-dating the houses recently demolished has caused us to continue our excavations in the area next to the bakery. More interesting still are the layers in this area producing rim, body and base sherds of Medieval pottery. Regrettably, no coins have so far been found in these layers, but the pottery has been tentatively dated by the Guildhall and London Museums as 12th to 13th century. This agrees well with a dating made by John Hurst when the sherds were found.

On Saturday 26th August, Roy Canham, Field Officer of the London Museum, visited the dig and a useful discussion took place; diggers were regrettably few on that occasion! The finding of this material is unusual in North London, the nearest documented site being at Northolt.

The Burroughs dig takes us back archaeologically towards our Saxon beginnings. The number if diggers has fallen off in recent weeks, due to the holiday season. A special effort is needed, therefore, for these last few weeks if we are going to be able to wring all the knowledge available from this interesting site. So wil anyone who can help, even for a couple of hours at a time, please come along to the Burroughs at the following times:

Donation or loan of stirrup pump for watering the trenches. If you think you can help, please contact Jeremy Clynes.

These walks are along the banks of the River Brent upstream to its source near Arkley, so for the benefit of those members who were unable to come on the first two walks, here are a few points of local interest seen on the way so far. The River Brent flows for some 18 to 20 miles, mostly through Middlesex, before entering the Thames at Brentford – our old county town.

We started the first walk from Henleys Corner along part of Mutton Brook – which here forms the ancient parish boundary between Hendon and Finchley – passing the site of once famous watercress beds (now a swamp, but still remembered by a few very old inhabitants), alongside the remaining part of Hurst Wood on the Hendon side – known in the 18th century as Foxhole Wood – by Decoy Wood at the site of Decoy Farm, where the brook flows into the River Brent, sometimes here called Dollis Brook. Now walking upstream, we soon pass the high waterfall at Hendon Lane where the river was once dammed to form a long lake to enhance the view from the nearby Manor House (Tenterden Hall). Further on, it flows under the old red brick Waverley Bridge and so to Mill Hill East where our first walk finished.

The next walk was from Dollis Lane under the high arches of Dollis Viaduct where the walk becomes more wild and wooded with small backwaters and pools when passing the grounds of Nether Court and the Finchley Golf Course, on through the well-kept grounds of Woodside Park, where another feeder of the Brent joins it from Mill Hill to the west, then out into the open fields of the Totteridge and Whetstone valley, and finishing at Totteridge Lane, the whole distance being about 4 miles.

We hope to continue these walks at a later date along the final section through part of Hertfordshire around the north of Totteridge and back towards Mill Hill to trace the river’s source in the deep wooded valley by Hendon Wood Lane just below Barnet Gate. This is a site having legendary connections from very early times with Anglo-Saxon mythology, in the story of Beowolf and the slaying of Grendel, the man-eating monster of the woods and swamps, and was mentioned in a 10th century Saxon charter as “Grendchen gatan” (Grendel’s gates).

A neighbouring Society, the Stanmore, Edgware and Harrow Historical Society, has asked us to let members know about its forthcoming exhibition on the local history of Stanmore and Harrow. This will take place on Saturday. October 7, at St. John the Evangelist Church House, Stanmore, starting at 2 p.m. Church House is near the church, which many members may know because of its interesting historical associations. The present church, built in 1850, stands beside the older brick built church consecrated by Archbishop Laud in 1632 and not used after 1850. At his trial, Laud was accused of consecrating a “Masshouse” at Stanmore, and replied “No air. It is a parish church”. The exhibition will include the Moxom collection, found at Brockley Hill about 1905, which the Stanmore society is borrowing for the occasion from the London Borough of Barnet.

Out and About – Summer Outings ’72

Forty members and friends supported the second of this season’s outings on Saturday 15th July. First stop was The Friars, a Carmelite Priory, at Aylesford. Time was allowed for a quick look round the tranquil surroundings, after which the party moved on to the nearby village of Eccles. There we walked to the site of a Roman villa, where the current season’s activities were explained by Mr. A. P. Detsicas, M.A., F.S.A., Occupation of the villa commenced in the period immediately after the Roman conquest and with subsequent rebuilding until 400 AD.

We paused for tea at the Mad Hatter and afterwards visited the Dolphin Sailing Barge Museum in the cool of the evening. There we received an enthusiastic welcome and a feast of Thames Barge folklore was discussed. Whilst looking at the collection of Barge by-gones, we were told that there are now 35 similar barges in seaworthy condition.

On Saturday 12th August a party of 33, including members of Camden Historical Society, amongst whom was the Secretary, Mr. G. D. Gregory, set off on a special outing additional to the regular summer programme to visit the important Roman excavations at Dover on show for a limited season in July and August. During the course of the work on the A20 York Street bypass road in 1970, extensive remains of the major 2nd century A.D. “Classis Britannica” fort, headquarterd of the Roman fleet in Britain, were discovered, just seven feet away from the site predicted by Sir Mortimer Wheeler as far back as 1929. This led to a major archaeological rescue digging operation by the Kentish CIB Archaeological Rescue Corps under the leadership of Mr B. J. Philp. Although saved for future generations by the raising of the new road level by up to six feet, the “Classis Britannica” fort has now been lost to view again. There was, however, a tour around an adjacent site where excavations are at present under way, conducted by a young helper from the Dover Archaeology Group. On this site, we saw evidence of settlement in Neolithic times from 4000 years ago to 2000 B.C., an Iron Age farm of around 500 B.C. and a later 3rd century A.D. Roman fort with impressive defensive walls and ditches. Above this were ditches and other evidence of a 4th century A.D. Saxon shore fort, destroyed by fire in 800 A.D. and signs of Medieval and later occupation. A final highlight was the now famous 2nd century A.D. Roman “Painted House”, with the walls of two large rooms completely covered by brilliantly coloured painted plaster, unparalleled in Roman Britain, or indeed outside Italy. Members of the party also took time to visit Dover Castle and explore the town. Despite some rather disappointing weather, the expedition was voted a great success by all who participated.

John Cresswell of the London History Society conducted this exercise on the afternoon of Saturday 19th August. Members of the HADAS were invited. We were first given a little background history of the immediate area of Southwark adjacent to the early London Bridges and a presumed Roman road, possibly extending under Southwark Cathedral. Finding our way over the parapet and down to the river margin was the first adventure – it is a very long way down indeed! Wellington boots and old clothes were essential for nedgotiating the slippery and squelchy area left by the retreating tide. Soon everyone was scratching away at the area of their choice and many objects were unearthed. Some worked flints were found – these, by prior arrangement were given to John Cresswell. Jeremy Clynes took charge of the pieces of Samian pottery found by our members. Other finds included pottery sherds of Medieval and Tudor dating – further examples being nearer our own time. Many pieces of encrusted iron abound, such as nails, bolts and horse bits. It was a lovely, sunny afternoon with a brisk breeze and those of us who participated thoroughly enjoyed ourselves.

Food for thought – a collection of classes for the Autumn

The course combines lectures and demonstrations of field work in a study of man in S.E. England, and forms part of a three year Certificate in Field Archaeology. The courses are :-

The miscellaneous courses listed below are available locally:

Civilisation and its origins – What is civilisation? A comparative study of the distinctive styles and achievements of man’s first civilisations in Egypt, the Near East, the Indus Valley and elsewhere. 36 The Grove, Southgate, N13 (Southgate WEA branch), commencing27th September. 10.00 a.m. fee £2.50.

The following courses are advertised in the London Borough of Barnet booklet (Adult Educations News), available from Public Libraries, which describes how to obtain details of the classes and enrolment procedures.

The successful WEA classes in Roman Archaeology which began with the help of the Society two years ago is now starting its third year. Unfortunately no new students can be admitted. Earlier this year many members of the class, together with their tutor, Mrs. M. Roxan, and some members of her other classes made a very successful and interesting trip to Hadrian’s Wall. A class on Victorian England held in January was also well attended.

Of interest to members this year, starting on 5th October, is a new class on Art and Architecture of the Renaissance. Full details are given in the enclosed leaflet. Other classes of Archaeological and historical interest are being planned. For further information, write to the Secretary, WEA (Hendon), Mrs. P. S. Deacon.

Particulars of the wide range of classes on subjects which may be of interest to members are shown on the separate sheet enclosed with this Newsletter.

Dr. John Alexander of the Department of Extra-Mural Studies at the University of London will be conducting two tours during 1972/3 as follows: 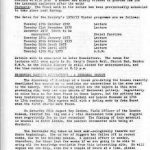 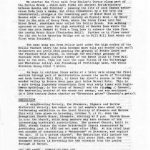 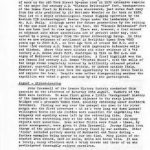 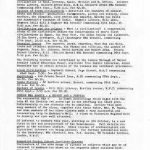