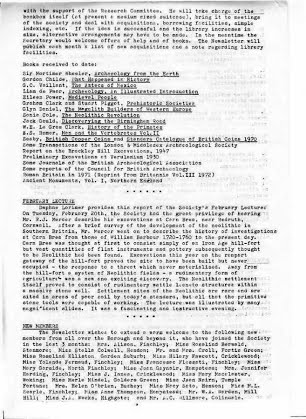 We must thank members for responding so speedily and splendidly to the announcement of the Reception and Lecture in honour of Mayor and Mayoress on 31 March. With nearly a month ago, more than nine tenths of the tickets have already been sold. If by any chance you haven’t got yours as yet, please apply quickly, either to the Hon Secretary or the Hon Treasurer, or you may be too late. There is a limit to the capacity of the Hall, and when that limit is reached the Hon Secretary will open a waiting list, so that any last-minute cancellations can be filled from it.

As well as the Mayor and Mayoress, the Society will that evening entertain the Bishop of Edmonton (who lives in the Borough), the Rt. Rev. Alan Rogers, and Mrs. Rogers; and the Borough Librarian, Mr. S. J. Butcher and Mrs. Butcher.

Members are asked to bring their tickets with them as these will be exchanged at the door for name cards. No tickets will be on sale at the door. We look forward to seeing you on 31 March at 7.00p.m. at the Cavalier Suite , the Prince Albert, Golders Green Road.

Christine Arnott sends us this report on the Old Curiosity Shop which she is organising for March 31st: “interesting objects of all kinds are already coming in for the shop, but may I make a last plea for members to search again for still more items? Anything small — such as figurines, for foreign dolls, costume jewellery, brass or metal objects, as well as those mentioned in last our last newsletter, will all be welcome, provided they are in good condition. There’s always someone on the lookout for oddments.” Please telephone Christine Arnott of Daphne Lorimer and collection will be arranged. Articles can be brought to the Society’s next lecture (March 20th) and handed to Daphne Lorimer.

Our Programme Secretary, Liz Holliday, gives these advance details of the programme:

An illustrated lecture by Dennis Hazelgrove on the Fulham potteries. This is an interim account of the excavations which took place last year under the auspices of the Archaeological Section of the Fulham and Hammersmith Historical Society. Processing of pottery finds has continued throughout the winter, and the talk will include much unpublished information. 8.00p.m. at St. Mary’s Church House.

Please note that this lecture takes place on the second, not the third Tuesday of the month. Dr Helen Wallis will be of a talk on “maps as an aid to historical research”. Dr Wallis is Superintendent of the British Museum map room, and this will be an illustrated lecture. 8 p.m. at St. Mary’s Church House.

The Annual General Meeting, coffee and biscuits at 8 p.m., then the business of the evening and finally a short programme of films. An excellent opportunity to meet and talk, to do come along.

A visit to Colchester to see the Roman parts of the city, including the Museum.

A Medieval and Saxon day, visiting Tamworth and Lichfield Castle. The trip may include a call to the Wall Roman Museum.

A visit to the recently opened at Wealden and Downland Museum At Singleton, near Chichester — an outstanding folk Museum of 35 acres in a glorious setting.

Blenhiem Palace and Woodstock, near Oxford.

On Saturday 31 March the London and Middlesex Archaeological Society holds its tenth annual conference in the Livery Hall of Guildhall at 2.15 p.m. The programme includes talks on various archaeological projects in the London area, and an account of Rescue’s survey “The future of London’s past”, and displays of recent excavations and research. Tickets costing 50p include an excellent tea; please contact our Hon Secretary for details.

The last item of the conference — a half-hour talk by a Dr Waechter on his 1972 excavations at Swanscombe — is timed to start at 5.30. Our reception for the Mayor and Mayoress begins at 7.00p.m. so members attending both functions will have to make good time between Guildhall and Golders Green

Members will be saddened to learn of the death last month of Mr Jim Banham. Mr Banham had been a member of the Society almost since its inception, and together with his wife had been one of our most regular attendants at Society meetings.

Although his health prevented him taking part in more active pursuits, he never failed to visit any dig the Society was doing and took great interest in all our activities. As an official of the House of Commons, he kept careful watch on any mention of architectural matters in Parliamentary debates and saw that the Society was well briefed with cuttings and notes from Hansard and other sources.

Mr Banham had undertaken for some time the task of sending out the Society’s material in the form of the newsletter, special notices and other information. Unfailingly cheerful, he had addressed on our behalf thousands of envelopes and stuck on as many stamps. We were particularly pleased to have him with us at the Christmas party, as delightfully gay as he always seemed. We shall miss him very much indeed, and would offer Mrs. Banham our most sincere sympathy.

Ann Trewick sent us this note: Just recently a lamp was brought into the Society for identification. It was found some time ago by a Mr N. Ashdown near the Great North Way entrance to Copthall Playing Fields (TQ 230904). Guildhall Museum suggests that the lamp is of Eastern Mediterranean type, rather late in date 3rd or 4th century AD. It is extremely coarse pottery and very heavy. There is an attractive design on top, possibly of leaves, and a slight ring base beneath. It is definitely not of British manufacture. British lamps are rare and much more crude in design. It is interesting to note that three lamp-holders were found at Brockley Hill; possibly at least one of them was manufactured there.

The Society will always be pleased to help in identifying objects found in the district. Please contact the Hon Secretary in the first instance, giving as much detail as possible concerning the location and circumstances of the find.

Following Ted Sammes notes on milestones in newsletter 22, you may be interested to know that, like Ted, the Council for British Archaeology is troubled by the rapid disappearance of these interesting relics from our roads — particularly now with measurement in kilometres in the offing.

CBA has therefore drawn up a Milestone Code of Practice, for the use of archaeologists, which goes like this:

1. Stones or posts marking mileages on highways, being important indications of historic development, should be retained on their original sites wherever possible.

2. Age or materials used do not afford a criterion for selection; all types of posts are of equal importance.

3. If a post has been moved because of highway widening, it should be reset at the same distance point but father back from the centre of the road.

4. If a diversion or bypass is built affecting the main highway at a milestone point, the post should be retained on the original alignment.

5. In cases of extensive redevelopment at the side of the road and affecting the position of a milepost, the milepost should be retained and included in the new design.

6. If, however, there is a compelling reason to remove our milepost (risk of vandalism, complete redevelopment obliterating the highway), it should be offered to a local museum or other location for safe custody, but not destroyed.

7. All ancient mileposts should be surveyed and written up and photographic records made; scheduling under the Ancient Monuments Acts should be sought.

8. Future substitution of kilometres or other linear measurements for miles will not be a valid reason to remove mileposts.

It has been decided that the Society should start to form its own library for the use of members. In the initial stages the “Library” will consist simply of a bookbox containing books, pamphlets, and other publications which may be borrowed by members and read at home. A start has already been made in assembling the nucleus of the collection, which will consist mainly of books and journals concerning archaeology, history (particularly local history), special interests such as pottery, coin collecting, geology, etc., and transactions of other societies.

The first books have already been donated by members, and a small exhibition of this material will be on display at the next lecture on 20 March. The Society is unable to purchase more than a very small number of books and must rely on the generosity of members to build up a collection. All members of therefore asked to donate books of their own which they may no longer require, to obtain inexpensive copies from second-hand bookshops (in good condition, please) or to send small sums to the treasurer for the express purpose of expanding the library. Books will be available for loan at Society meetings or by arrangement with the Society Librarian.

The Society is now anxious to find a member who will act as Librarian. He or she will be responsible for the efficient running of the Library, with the support of the Research Committee.

He will take charge of the bookbox itself (at present a medium sized suitcase), bring it to meetings of the Society and deal with acquisitions, borrowing facilities, simple indexing, etc. If the idea is successful and the library increases in size, alternative arrangements may have to be made. In the meantime the Secretary would welcome offers of help and of books. The newsletter will publish each month a list of new acquisitions and a note regarding library facilities.

Gordon Childe -What happened in History

Some transactions of the London & Middlesex Archaeological Society

Some journals of the British Archaeological Association

Some reports of the Council for British Archaeology

Daphne Lorimer provides this report of the Society’s February lecture.

“On Tuesday 20 February, the Society had the great privilege of Mr R. J. Mercer describe his excavations at Carn Brae, near Redruth, Cornwall. After a brief survey of the development of the Neolithic in Southern Britain, Mr Mercer went on to describe the history of investigations at Carn Brae from those of William Barbour, 1720-1760, to the present day. Carn Brae was thought at first to consist simply of an Iron Age hill-fort but vast quantities of flint instruments and pottery subsequently thought to be Neolithic had been found. Excavations this year on the rampart gateway of the hill-fort proved the site to have been built but never occupied – the response to a threat which never materialised. Away from the hill-fort, a system of Neolithic fields – a rudimentary form of agriculture – was a new and interesting discovery. The Neolithic settlement itself proved to consist of rudimentary wattle lean-to structures within a massive stone wall. Settlement sites of the Neolithic era are rare and are sited in areas of poor soil by today’s standard, but all that the primitive stone tools were capable of working. The lecture was illustrated by many magnificent slides. It was a fascinating and instructive evening.” 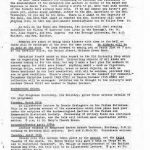 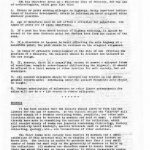 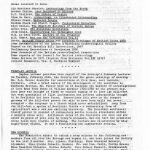