Programme for next winter

The Programme Committee has recently been hard at work arranging a varied series of lectures for 1974-5. All meetings (except the Christmas party) will be at Central Library, The Burroughs, NW4, on the first Tuesday of the month, starting at 8.00p.m. Coffee first, followed by the lecture.

The first meeting is on Tuesday 1 October, when HADAS will play host to the Camden History Society. A number of Camden History members hope to attend, so if you find an “unknown” sitting beside you, do making him — or her — welcome.

Camden have asked us to demonstrate what a local archaeological society like HADAS does, so we shall provide a cross-section of our outdoor activities. If you are a new HADAS member, this meeting will fill in the scene for you, too; while for members of longer standing, trying to keep in touch with the many-sided activities of our Society today, this is also your chance!

Ted Sammes will talk about the Church End excavation, Paddy Musgrove will discuss intricacies of hedgerow dating and Percy Reboul will describe the fascinations of churchyard surveys. All with slides.

This will be on Saturday 14 September, with visits to Wormleighton deserted medieval village, Compton Wyngates and the Rollright Stones.

Very few places are left, so apply quickly. Will members who have booked verbally please complete the enclosed booking form and send immediately, with remittance, to Dorothy Newbury.

At this year’s Christmas party we hope to raise funds for the Society by running a Tombola. Dorothy Newbury, the tombola past-master, will be in charge.

Will members prepared to help please start now collecting small eye-catching objects? Every tombola ticket draws something, so we need a lot of prizes. Mrs. Newbury will welcome tombola gifts at the October and November meetings.

A note by Paddy Musgrove.

The Battle of Barnet was fought on Easter Day, 1471: “upon Gladmore Heath , halfe a mile from Barnet”. We are told this by John Weever, in 1631. Other writers, including Sir John Paston, have confirmed the exact distance. And Sir John was in a position to know. He had taken part in the battle and was writing to his mother only four days later. We may therefore assume that the Medieval Manor House of Old Fold — the moated site of which is now the eighteenth green of Old Fold Manor Golf Club — was in the middle of that bloody and fluid battle.

Edward Walford (Greater London, 1882) tells us that some of Warwick the Kingmaker’s men are said to have sheltered in the building on the previous night. Whether this is true or not, we know, from the official Yorkist account (the Historie of the Arrivall of Edward IV), written within six weeks of the Battle, that when Edward had reached Barnet on the evening of April 13th he found “under an hedgesyde were redy assembled a great people, in array, of th’Erle of Warwike”.

Local tradition has it that this hedge still exists on the golf course and that it follows the line of a public right-of-way running NW to the present St. Albans Road from the footpath guide post at TQ 2412 9771.

In order to establish if this particular hedgerow could possibly have been in existence 500 years ago, Mrs. Isabelle Cruickshank and I recently carried out a survey, based on the methods evolved by Dr Max Hooper and described in the March, 1974, Newsletter.

Going NW from the guide-post, we found that the first 110 yards of the hedge was sparse and seems to have been recently planted or re-planted, as it consisted almost entirely of young oaks. From point 2405 9778 on, three consecutive 30 yard stretches were examined.

A section contained 5 different species. Common Hawthorn, Midland Hawthorn, Blackthorn, Pedunculate Oak were present in all three. In addition, the first section contained Field Maple, while the second and third both contained Ash. There were also many Hawthorn hybrids in all three sections. The presence of Midland Hawthorn (Crataegus laevigata) in this area could in itself suggest antiquity.

At one point, where the hedge widened out into a spinney, 4 additional species were found, namely Sycamore, Crack Willow, Wild Plum and Silver Birch. This area may have been separately planted as a copse and therefore was ignored for statistical purposes. Only species directly on the hedge-line were considered and consequently our dating is likely to be conservative. Our conclusions were:

1. On the basis of Dr. Hooper’s equation, the median date of hedge-planting is the late fourteenth century.

2. The hedge is likely to have been well-established at the time of the Battle of Barnet.

3. It is possible that local tradition just come to be correct.

On August 17th a small but dedicated HADAS band, led by Alec Jeakins, met to trace the growth of Edgware over the last of century. Despite the arrival of a single-track GNR line from Finsbury Park in 1867 (long since disused) and trams from Cricklewood in 1904, major development in Edgware can really be dated to the opening of the extension of the Northern Line tube from Golders Green, exactly 50 years ago — in August, 1924. Between 1921-31 the population rose from 1576 to 17500.

If one man could truly lay claim to having been the “architect” of the present-day Edgware, it is George Cross, an ambitious young estate agent who sensed that the area was ripe for development as early as 1910. Expansion quickened dramatically with the arrival of the tube. In 1926 Cross, in conjunction with the architect A. J. Butcher, developed 85 acres of the Canons Park Estate, where houses, expensive for their day, ranged from £1500 to £3500. In the eighteenth century this estate had belonged to the Duke of Chandos. The pillars of his ducal gateway still survive, and on the site of his huge mansion, built in 1712 at a cost of £250,000 and demolished some 40 years later, now stands the North London Collegiate School.

Next we visited the baroque church of St. Lawrence, where we saw the Duke’s pew, the Chandos Mausoleum, and the organ played by Handel when he was the Duke’s “chapel-master” at Canons.

We looked too at Cross’s “Premier Parade” of shops, dating from 1924; and at the Edgware Manor Estate, also developed by Cross in the 1920s. Finally, on the corner of Hale Lane and Broadfield Avenue, we saw a “modern” house, dated 1934 and originally refused planning permission because it was “too violent a contrast with the adjacent property”!

All thanks to Alec Jeakins for arranging this outing and opening our eyes to the finer points of suburbia.

Book-list for the Medieval Period

Drawn up by Edward Sammes.

This list is a follow-up to that on Roman Pottery in Newsletter 42. The Medieval and post-Medieval periods were somewhat neglected until after the last war – the first A.G.M. of the Society for Medieval Archaeology, for instance, was only held in December 1957. Much material is also reported in the publications of the County and local Societies. The list below covers many aspects of the period; regrettably there are few low-priced books o the subject.

MEDIEVAL ENGLISH POTTERY, Bernard Rackham, 2nd edit, revised J. G. Hurst, Faber, 1972, £6.50. Deals with the full pottery range of the period, well backed up with 96 full-page photos and 8 colour plates. Regrettably there are no drawings of pots nor is the humble cooking pot in much evidence.

MEDIEVAL TILES, Elizabeth S. Eames, British Museum, 1968. Price when published, 9s 6d. Comprehensive booklet on the decorated tile and on the use of shaped tiles to produce a mosaic.

MEDIEVAL CATALOGUE, H.M.S.O. 1967, £3.15, by post £3.42. Gives details and illustrations of objects of everyday life in the Middle Ages from combs to cooking pots. Re-issue of an original printed in 1940.

MAP OF BRITAIN IN THE DARK AGES, pub. by the Ordnance Survey, 1966, 87 1/2p. Has an introductory text, an index of Dark Age sites and a map showing their location.

MEDIEVAL ARCHAEOLOGY, Vol 5, 1961, The Kitchen Area of Northolt Manor, Middx. J. G. Hurst. Comprehensive report of 89 pages with good drawings of everyday wares of the period. This is our nearest well-documented site.

CHAUCER’S LONDON, Brian Spencer, London Museum, 1972. 30p. Originally produced for the exhibition of Medieval London, this is a good guide and introduction to the present Medieval Gallery.

Members will be saddened to learn of the death of Mrs. M. Herbert, one of the founder members of HADAS. She had been unable for to join in the Society’s more active pursuits but she maintained her interest in Hendon history, enjoyed lectures and always came to exhibitions at Church Farm House Museum.

Her son, sorting her papers, found a HADAS Newsletter in which the Hon. Treasurer had appealed for trading stamps; alongside were some six books and two boxes of stamps. Dr Herbert kindly sent them to us, saying he felt sure his Mother had been collecting for HADAS. We hope to use the stamps to provide tools or a measuring tape for excavations, in which Mrs. Herbert took a lively interest.

Come September we usually give brief details of some of the many courses starting locally this autumn.

CERTIFICATE IN FIELD ARCHAEOLOGY. No local first or second year courses, but there is third year course at Barnet College.

TUTORIAL CLASSES in Greek and Roman Archaeology in Barnet, Friern Barnet, Golders Green and Hendon. The Hendon course continues the class HADAS helped to start four years ago. New members can be accepted.

TUTORIAL CLASSES on the Victorians and the History of London in East Barnet, Edgware, Friern Barnet; at H.G.S. Institute — two HADAS members will be lecturing – Stella Colwell on Genealogy and Palaeograophy and Philippa Bernard on Elizabethan England.

Further details of all classes from the Hon. Secretary.

Perhaps it’s appropriate to record here that we know of 7 HADAS members who hold the Diploma In Archaeology — there may be others. At least 14 members have done part of the Diploma. The Certificate has not been existence long enough for HADAS to notch up any holders: but at least one member is about to start his final year. Two HADAS members hold the Diploma in Local History.

Finally, news of a short, non-local course: this is a “teaching exercise” organised by Harvey Sheldon on Monday evenings for five or six weeks starting in September, on the processing of finds from the initial stages onwards. The material used, mainly Roman, will come from digs in Southwark and at Old Ford.

The course will take place in the Southwark Archaeological Excavation Committee’s Warehouse beside the London Bridge. For precise date and time of starting, please ring now. Mr Sheldon asks us to say that HADAS members will be particularly welcome.

This comes to HADAS members from the Railway and Canal Historical Society — to a lecture on Benjamin Outram, civil engineer. To be held at the Science Museum, South Kensington, at 5.00 p.m. on Saturday 5 October. Admission free, but by ticket, obtainable from Mr A. Roose. 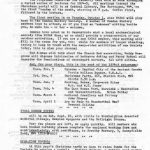 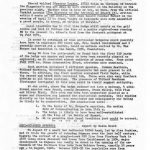 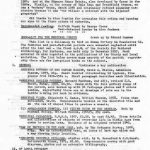 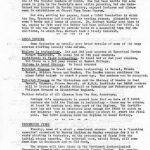