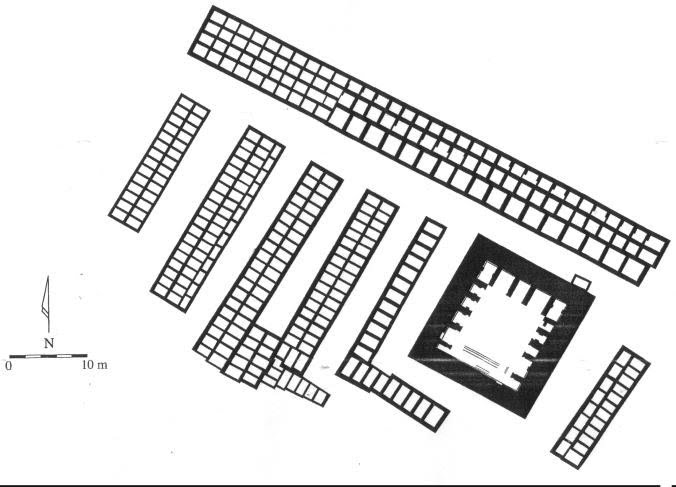 Can I take the opportunity to wish all our readers a very happy and healthy New Year. A shorter newsletter this month, but please keep contributions flowing.

Tuesday 12th: From Longboat to Warrior: the evolution of the wooden ship.

Lecture by Robert Hulse – Director of the Brunel Museum

THE TOMB OF A GOD by Tim Wilkins

At the end of November 2012 I joined a group of archaeologists and Egyptologists under Dr. Stephen Harvey, of the University of Chicago, to study at the ancient Egyptian site of Abydos, in what is now the central Egyptian region of Sohag. There are many elements to this huge and varied site including Dr. Harvey’s own excavations at the 50-metre square pyramid of Ahmose, and a series of 14 boat burials (see note 1). For me, however, the highlight was a visit to the site of Umm al Ga’ab in the low western desert, nearly at the mountain escarpment that marks the edge of the high desert. Here the German Archaeological Institute under Gunter Dreyer has been excavating a large number of royal tombs from the First Dynasty (3100 – 2900 BC), a number of tombs of the Pre-dynastic period around 3500 BC, and a cemetery from the Naqada period dating back to 4000 BC. The evidence from the Pre-dynastic tombs, covering a number of Kings including the Scorpion King, pushes back our knowledge of the earliest Egyptian kings by several hundred years.

One of the most interesting of the First Dynasty tombs is that of Djer, the third king of this dynasty, who reigned for 41 years from 3049 – 3008 BC. The tomb is a rectangular mud-brick structure sunk into the desert sand and now completely empty except for mud-brick internal buttresses and some statuary niches (see Figure 1 and photo 1). It was originally roofed with cedar beams. The inside of the tomb has been burned dark red from having been set alight in the First Intermediate period, a period from 2180 – 2055 BC when civil disruption, fighting, internal disorder and destruction wracked the country (plus ça change!).

Around the main chamber are 338 subsidiary shaft tombs containing the King’s servants and administrators who were killed and buried at the same time so they could continue to serve him in the after-life. In other tombs have been found mummified hunting dogs, and even lions, so the King can continue his favourite pastime of lion-hunting, and other pastimes are catered for by women of the royal harem.

The tomb was first excavated in the Middle Kingdom (11th – 13th dynasty, 2055 – 1650 B.C.) by pharaohs looking for the tomb of the god Osiris. With this tomb they decided they had found it, and placed in it a recumbent statue of the god impregnating Isis who has taken the form of a bird (see note 4), the remains of the plinths of which can still be seen. The statue is now in the Cairo museum. Once the tomb had been identified as that of Osiris it became a place of reverence and pilgrimage for a further two thousand years. When these pilgrims came to the tomb they left offerings in earthenware pots, a practice that has given the site its modern name of Umm al Ga’ab, “Mother of Pots” in Arabic. It is estimated that there are now the remains of between 8 million and 10 million pots, and somebody has the job of analysing and recording these by age, material, style etc.

We were very fortunate in being the last people from outside the dig team to see this tomb. The surrounding subsidiary tombs were already back-filled with sand to the tops of the mud-brick shafts (see photo 2), and in the first week of December the main chamber was back-filled, with just a sand mound marking its existence. This is to conserve it – the mud-brick is very friable and if left exposed would soon deteriorate under the sun and wind, turning to dust. So the tomb of King Djer and the god Osiris is once more under the Western Desert, and may stay that way for generations to come.

Note 1: After excavation and analysis, the wooden boats were left in their mud-brick surrounds and back-filled with sand, as lifting and preserving them was deemed too difficult and expensive. So they too are back under the sands of the desert.

Note 2: Early hints of the development of phonetic writing.

It is usually thought that writing developed in Mesopotamia, but Gunter Dreyer has found in the Naqada cemetery, and we were able to examine, small 1 cm square ivory tags with proto-phonetic writing on them. Not many of these can yet be read, but some can be interpreted through their similarity to later hieroglyphs, reading for example “From the Eastern lands” and “ From the Western lands” indicating that they were used to identify the source and perhaps content of goods containers – maybe recording who had paid their tributes and taxes.

Note 3: Is this where pyramids started?

The tombs of the early kings were covered by a sand tumulus and, according to Dreyer, there was a problem with this tumulus being blown away by the desert winds, so by the time of Djer the tomb was supported with low mud-brick walls. However this did nothing to stop the predations of animals, so they then built a larger surrounding perimeter wall. However this hid the tumulus from view, so they added a second higher level to it in a step, and by the Third Dynasty this had developed into a step pyramid – and pyramid building was under way.

Note 4: the legend of Osiris and Isis

Osiris was the oldest son of the earth god Geb and the sky goddess Nut. Isis was his sister and wife. Osiris’s brother Seth wanted his kingdom (the underworld) and killed Osiris, cut his body into pieces and scattered them around Egypt. Isis travelled all over Egypt looking for the pieces and collected them all back together, except for one – his penis. So she created a new one for him, reaffixed it, and with a magic incantation brought him back to life long enough for him to impregnate her with their son Horus. 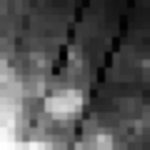 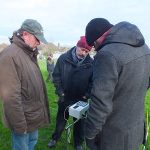 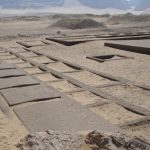 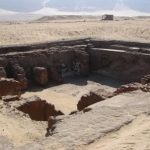 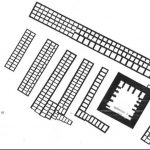 A large number of HADAS members and their guests assembled at Avenue House for our Christmas Party. Some 48 attended. Four people were unable to come, so we could have had over 50, a large number for any HADAS event.

It was so nice to see several of the more senior members, particularly Phyllis Fletcher, who came in her wheelchair, Joan Wrigley and Rosalie Ivens. Plenty of time was allowed for them and others to catch up on news.

A short table quiz was provided with questions and pictures of personalities from the 1950s. Apologies to those who might have expected something Roman but we could not go back that far for photographs. The winners found themselves presented with a HADAS mug containing a chocolate Father Christmas.

Food and drink was provided by Avenue House, with manager Malcolm slaving away in the kitchen. Added to this were two magnificent Christmas cakes – the product of further slaving by the Chairman’s wife, Liz.

Music in the form of Christmas songs and carols was provided by Jo Nelhams on digital piano, enhanced by the singing of many of those present, and a good time was had by all.

Our thanks are due to those who kindly provided prizes for the raffle.

Many of us remember Geoff Egan, a hirsute member of the Museum of London, a man with encyclopaedic knowledge of all things medieval and post-medieval, who died in February 2011. A memorial lecture series has been established in his name. This, the second lecture, was held at the Society of Antiquaries on the 14th December 2012 sponsored by the Society for Post-medieval Archaeology. In front of a large audience Bly Straube, the senior archaeological curator at Jamestown, Virginia, USA, the site of the first permanent European settlement in the US in 1607, spoke of the exciting finds from over 25 years of excavation at the site. Over 1.5 million artefacts have been recovered and are conserved and stored on the site.

It would be impossible to detail all the fascinating information which was discovered at this site about the lives of the settlers, their relations with the local native population, the dreadful time they went through when their food ran out, etc and etc., as told by Bly. A couple of things stood out for me:

Apparently each settler was entitled to bring a small bag of personal possessions with him. Some brought coins, for instance, even though there was no money as such in the new settlement, one man brought an antique lamp from the Roman period – I wonder why? Bly made the analogy with modern astronauts going up to the space station, who were also entitled to bring a small bag of mementos and one man took a Florida Fishing License with him – again why?

Trade with the local natives consisted inter alia of glass beads and trinkets and yet on excavations at the natives’ dwelling places almost no such artefacts are recovered – why?

Most of the artefacts, e.g. ceramics, well-preserved metals and so on, came with the settlers from England and as such are a great help in dating the currency of such artefacts. Bly clearly is a great enthusiast about the site and its artefacts and succeeded in communicating her enthusiasm. The web site for Jamestown is https://www.historicjamestowne.org/. It is well worth a visit, especially if you haven’t seen the real thing!

Roger Chapman, a governor at Martin Primary School, East Finchley, is involved in planning the centenary celebrations of the building the school is housed in. As part of that celebration

Roger approached UCL and HADAS to plan a historical and archaeological review of the area. The first manifestation of that task was to carry out some resistivity in the school playing fields during the school’s Christmas fair. Vicki Baldwin, Tim Curtis, Bill Bass, Andy Simpson, Jim Nelhams, Gabe Moshenska (UCL) and I set out a 20 x 20m grid on a very wet playing field on a freezing cold day.

After we completed the grid we processed it on the HADAS computer and were able to show our results to the teachers, parents and pupils who were there. The results were very interesting as can be seen from this photograph of the results as displayed on-screen.

The photograph seems to show a number of field drains running across the playing field towards the school, where we are told there is a large water-collecting culvert. However there are other interesting anomalies also apparent that we look forward to exploring in the spring.

Thanks to all who took part in this first task in what looks to be an exciting and worthwhile project.

Until January 13th Barnet Museum has an exhibition of loaned objects from The Foundling Museum’s Foundling Hospital and Coram collections. In connection with this there will be an exhibition of images from the Foundling Museum, running until 20th February. The loaned objects will later go on tour until mid-April and can be seen at the public libraries in Hendon, Barnet and Chipping Barnet.