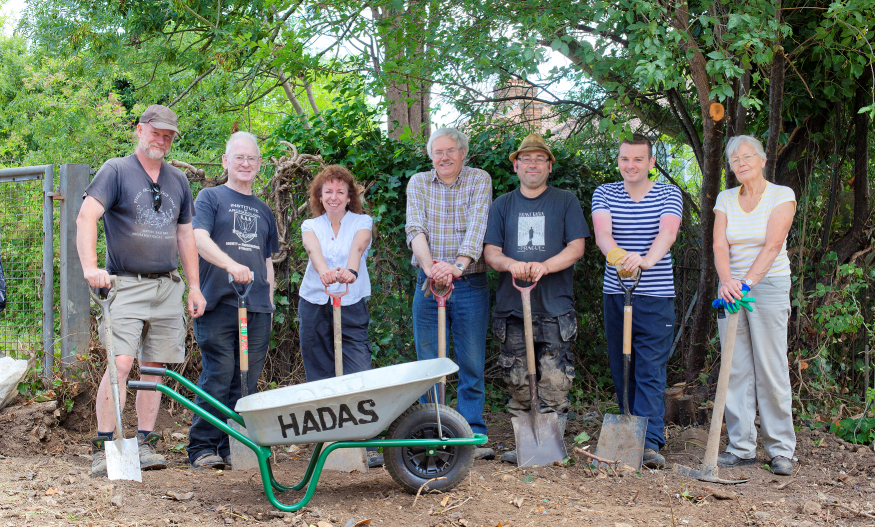 Part 5, Investigations of the north corner of the farm complex

Clitterhouse Farm, a moated manor site, has a long-documented history. Archaeological research work is being carried out to try and establish the Saxon/medieval and later layout of the site. Following on from work here in 2015, a resistivity survey and further 3 trenches were excavated outside the northern corner of the main building complex in the summer of 2016.

From maps, it was known that from periodical rebuilding of the farm a ‘cow-shed’ and

‘wheatbarn’ were erected and attached to the northern corner of the present farm layout, perhaps with the ‘moat’ in this area being filled in to enable this. This range of buildings was demolished

c. 1900-1910. It was decided to carry out a resistivity survey on the grassy land here. The results showed a variation of high and low readings which could be interpreted as rubble/walls, and with what could be a service trench (water or similar) cutting through at a SW-NE alignment. Trench 1 (2 x 2m) was laid out to take in some of the various resistivity readings some 2m away from the present building. A further two smaller trenches were excavated in front of the NE range near the door of the ‘Farm Cottage’.

The north corner of Clitterhouse Farm showing the position of the trenches; the arrows are indicating the walls (and their alignment) as excavated in the trenches.

The 2 x 2m trench was started at level 57.45 OD. The turf and modern topsoil [001] was up to 20cm thick; beneath this were further mixed sub-topsoils [002 & 003] of a modern date, approximately 30cm thick; inlaid into these and running SW-NE along the middle of the trench was a gravelly mortar feature with ‘shuttered’ sides which may have been a previous path or concrete ‘ducting’.

The next layers encountered contained a mixture of mortar/clay, some chalk and gravel, and notably [007/8] was of a redeposited clay mixed with a dense rubble demolition deposit of brick (loose and coursed), and mortar with roof tile including peg- and pan-tiles, some 40cm thick. This demolition deposit contained a wide variety of pottery but would seem to date to the 19th century. On the western side of the trench this layer had been disturbed by a ‘cut’, which turned out to be for a water or sewer pipe running E-W along the trench about 80cm down from the surface.

OD. Entering from the north the wall was approximately 38cm wide and built in a mostly

‘header’ bonding; it had a right-angle return in the middle of the trench and exited west towards Trench 3, each length of wall as seen was approximately 1.40m. About 3-4 courses of the wall were seen; it would seem a comprehensive job of demolition was carried out truncating most in situ deposits in this area – were the bricks reused in the subsequent rebuild of the farm?

Butting up to the southern return of the wall was a single brick course leading south to the SW corner of the south of the trench. There is evidence of a plinth on the internal face of the main wall, an indication perhaps that it is near the foundation, but we could not fully expose the full extent and depth of the wall due to time constraints and we did not get down to ‘natural’ for the same reason. The fairly modern water-pipe mentioned above cut through the southern return section of wall.

Another brick in the wall

Samples of brick were taken from the wall in Trench 1 [009 & 011]. A whole brick taken from the northern half of the wall measured L8½” x W4″ x Th2⅜” (224mm x 100 x 60), it was roughly made, hand-made (in a mould?) and showed little or no sign of a ‘frog’ (an imprint in the surface to lighten the weight and help key the mortar). A nearby half-brick of similar dimension, but thicker at 2¾”, appeared better made with sharper edges with a shallow frog.

The ‘header bonding’ technique was popular in the 18th century. “This bond is chiefly used for footings in foundations for better transverse distribution of load”, see www.theconstructioncivil.org/types–of–brick–bonds/

Herts Ware (ESHER 1050-1200AD) and Late Medieval Glazed Herts Ware (LMGH 1340- 1450). There are sherds of later Post-medieval Redwares and Slipwares, English Stonewares and various 19th century Transfer Printed and porcelain pottery. Other finds include corroded iron work, window and bottle glass and small amounts of animal bone, a fragment of clay tobacco pipe bowl dated 1680-1770 (form AO17), and a further bowl dated to 1700-1770 (form AO25). A large amount of roof-tile and brick rubble was seen but for the most part discarded.

An unusual clay-pipe stem (Trench 1, context 002) has a face with an elaborate ‘feathered’ headdress mould on it, not dated at present.

Trench 1, showing the return wall and water-pipe cutting through. North is to the left.

The slightly different alignment of the walls as excavated in Trenches 1 & 3 from the present main farm alignment (see plan above) is reflected in several maps/plans, especially the Bart’s Archive SBHB/HC/45/19 which shows a proposed rebuilding of the site c 1790-1816 and mentions ‘Old Cow House must be pulled down’. Whether the Old Cow House was pulled down at this time is a matter of conjecture and is difficult to see from the maps, but the offset wall lines do appear to be those of this structure.

So are these the brick footings of the timber-framed ‘Old Cow House’ seen on the illustration of 1715 SBHB/HC/45/2, or a later rebuilding c1800? The size of the bricks, a lack of a frog in many of them and the header-bond style could date our wall to the early 18th century, in which case they will be brick foundations of a timber-framed building, but more research is needed. We did not see any evidence of later rebuilding in the trench (although this was a relatively small area). This range of structures (Old Cow House and Wheat Barn) was eventually demolished c1900-1910; most of the pottery dates to the 19th century in the demolished layers, some earlier. The several sherds of medieval pottery once again perhaps hint at the earlier occupation in this area beneath the car-park.

Trench 2 was placed slightly west of Trench 1 outside the doorstep of what was known as ‘Farm Cottage’, on a patch of grass we could access. Beneath the topsoil (approximately 57.20 OD) and some ephemeral mortar/concrete layers, a mixed gravelly/pebbly context appeared [003/4], mixed in with this were plenty of finds such as brick fragments, tile, slate, glass, pot, metal fragments, animal bone etc. Also uncovered was an iron-pipe running E-W through the centre of the trench; it was 5cm in diameter, perhaps a water or gas pipe.

Underneath [003/4] a more compact surface was revealed made up of small to medium cobbles 20mm to 100mm diameter in a silty-sand matrix [005/6/7]; it was around 20cm thick. These variable gravel and cobble layers carried on until a more clay type context was reached at around 56.50 OD.

An interesting find (Trench 2, context 009) was sherds of a ‘Char Dish’ in Tin-glazed or Delft Ware. Char is a relative of the Trout found in the Arctic areas and the Lake District and is processed to a paste and served in these dishes. The vessels were quite popular with a fish motif on the outside and made in a variety of pottery fabrics, Tin-glazed ones are often associated with Liverpool potteries perhaps around the mid-18th century.

Essentially Trench 2 is a series of gravel and sand make-up deposits with at least one or more substantial cobbled floors in between. They seem to form a backyard, outside the backdoor of the ‘Farm Cottage’ with cobbled floors, remodelled, built-up, repaired with anything to hand – household rubbish, pottery etc, – along with other disturbances – the gas-pipe, demolition material which all dates to the 19th and early 20th centuries. This eventually was covered with thin mortar flooring which became covered with turf.

Trench 3 was placed in between trenches 1 & 2 to see what was going on; it was started as a        1 x 1m trench, later extended north-westwards to 1 x 1.5m. The upper layers were the similar gravelly and cobbled type seen in Trench 2, once again with the gas-pipe, although this had been  cut through and realigned. Again, substantial amounts of brick and roof-tile fragments were

observed, together with a scattering of animal bone and iron nails etc.

Approximately in the middle of the trench (below), beneath the cobbled layers, the top of another wall was discovered. This brick masonry was exactly the same style and bonding as the one seen in Trench 1, the alignment was also the same. It had been demolished to a level of 56.97 OD; excavation through re-deposited clay revealed a further 6 courses which appeared to finish on the natural London Clay. The distance between the walls of Trenches 1 & 3 was 5.75m.

Trench 3, North is to the left.

Again many of the ceramic wares reflect those seen in Trenches 1 & 2; notably recorded was part of a female figurine found in (Trench 3, 003), she has lost her head but is wearing a flowing dress, possibly Georgian or Victorian in style, and is carrying what looks to be a parasol.

Essentially the same as Trench 2, but Mike Hacker comments “The well-rounded flint pebbles in the cobbled surface look as if they may well have come from the nearby deposits of Dollis Hill Gravel. One of the characteristics of DHG is that it is a poorly sorted mix of clay, silt, sand and pebbles.  This makes it ideal for use as ‘hogging’ for roads and paths”.

The excavations have shown that some substantial archaeology still survives around the immediate area of the farm buildings and more work is needed to confirm the plan of the excavated walls and their date. The resistivity plot shows a possibility for further walls/ archaeology nearby so there is potential for more fieldwork here. 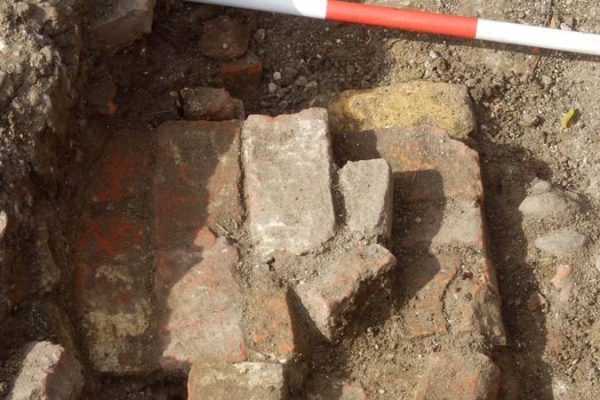 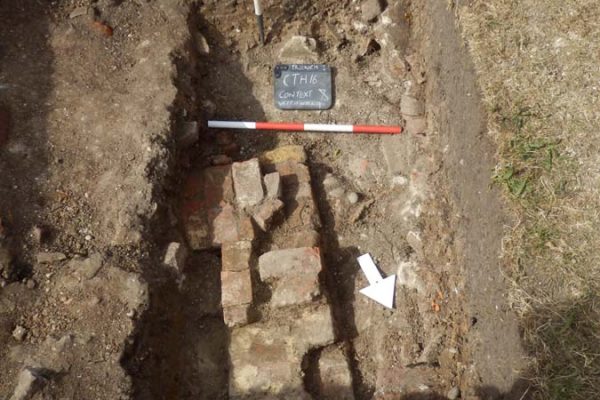 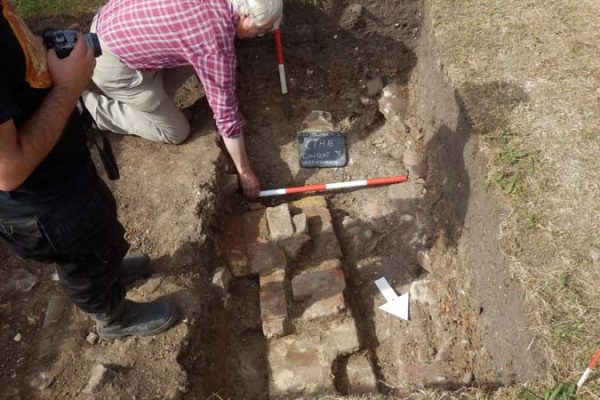 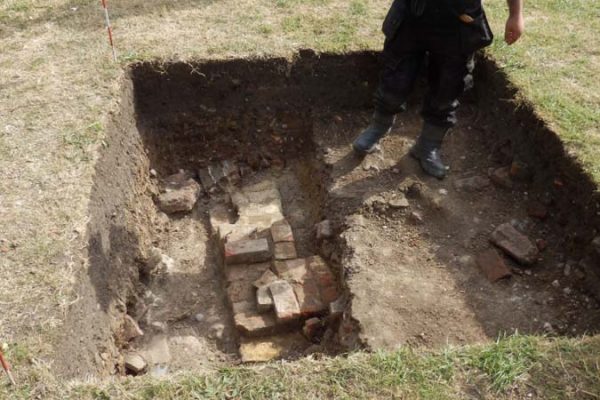 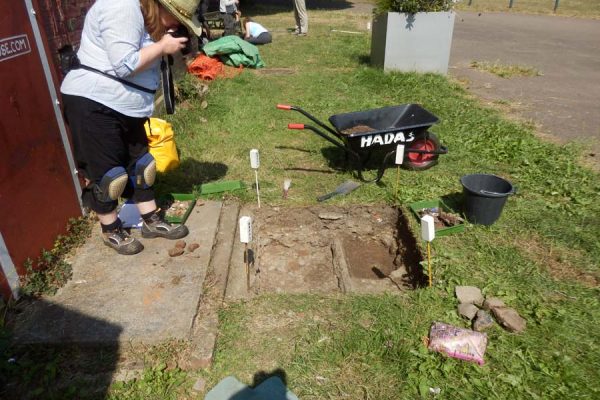 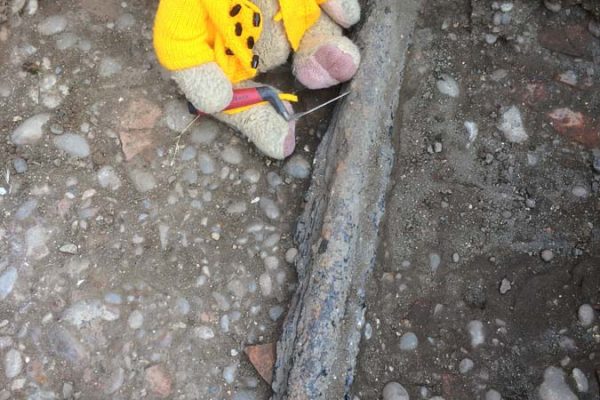 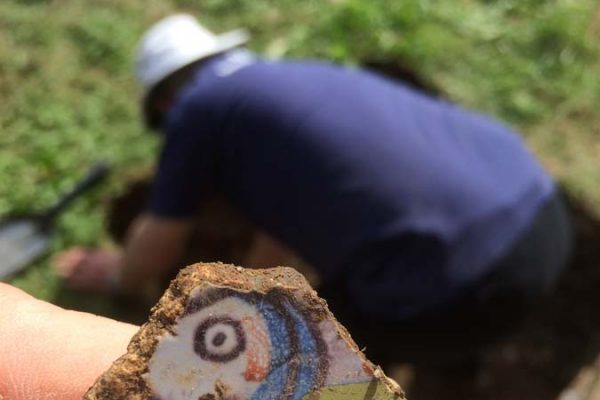 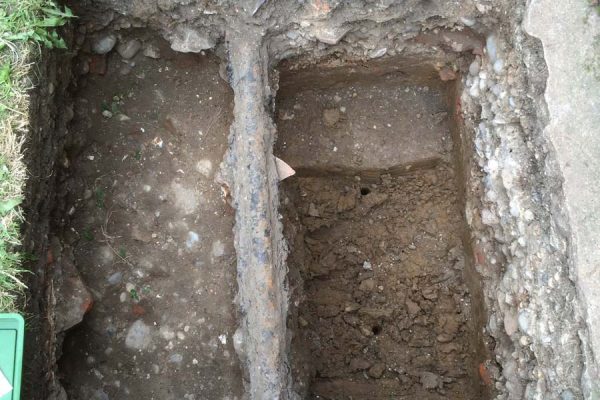 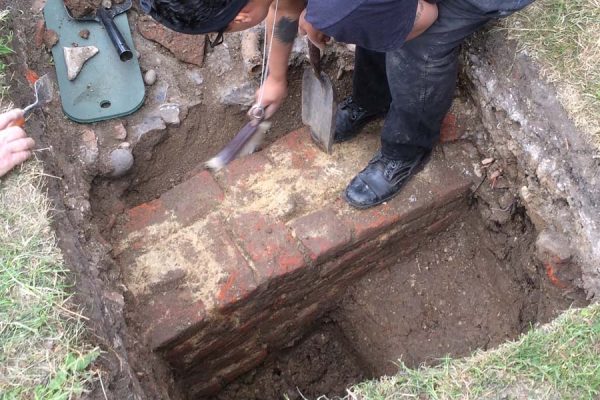 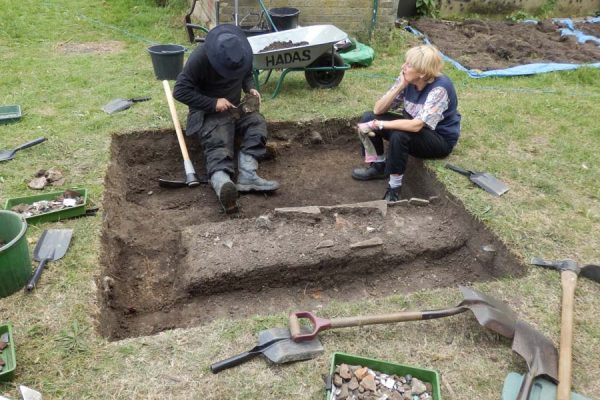 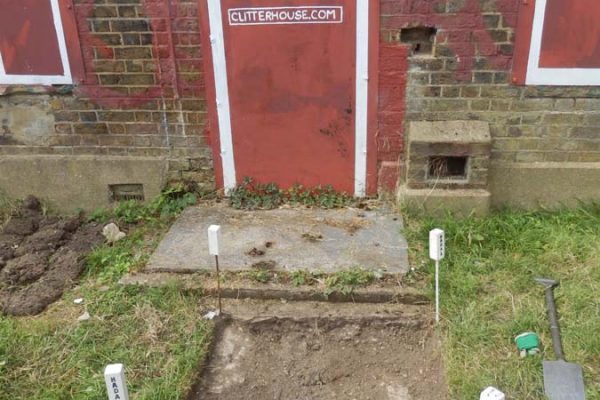 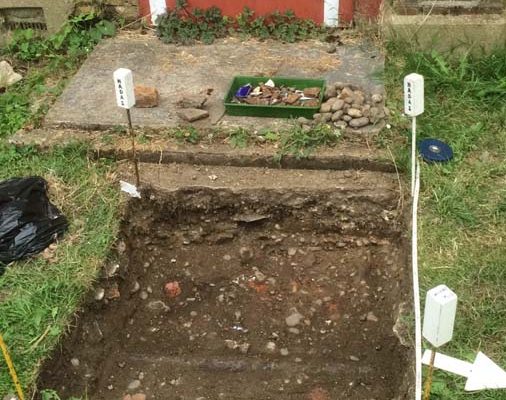 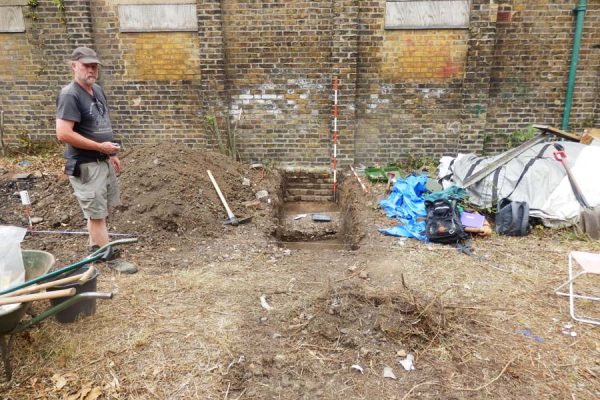 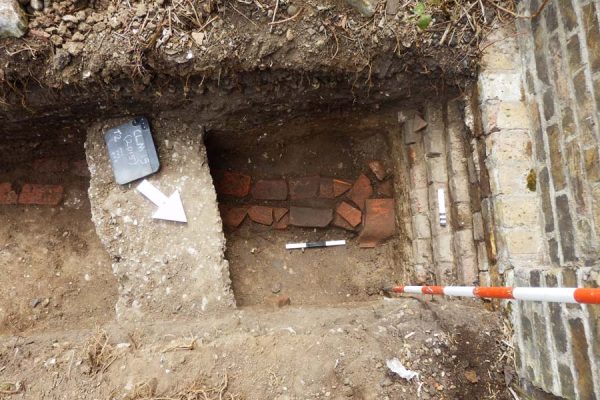 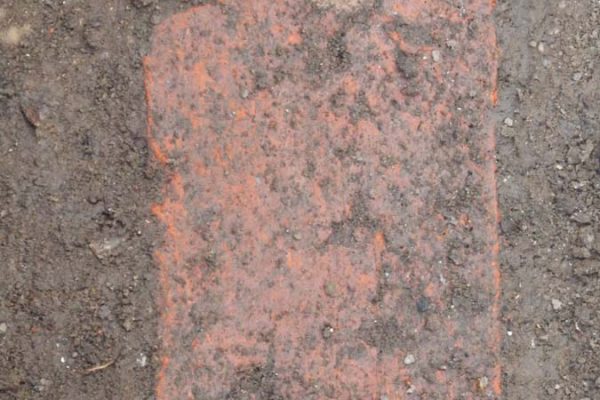 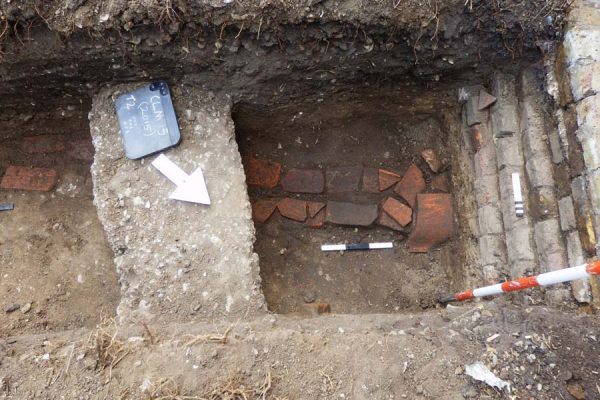 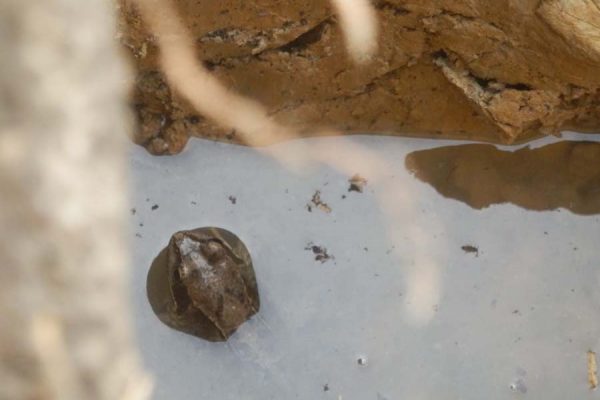 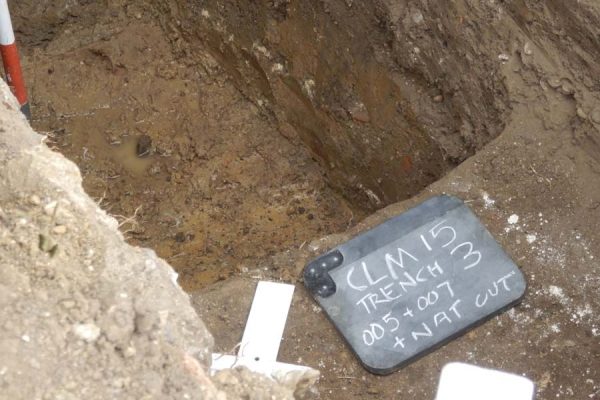 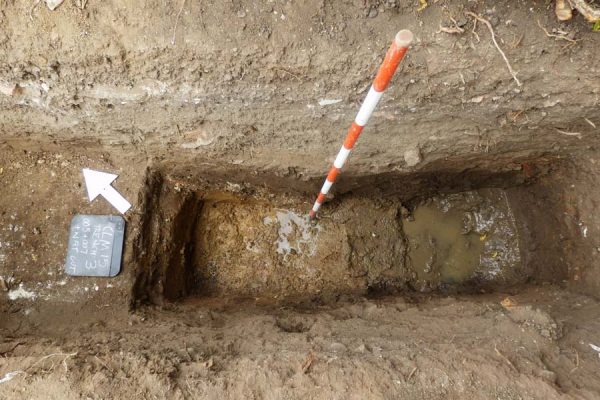