By LWDadminOctober 15, 1971Past Newsletters, Uncategorized

We wish to bring to members’ particular notice the forthcoming lecture n 16th November 1971 at 8.15 p.m. at St. Mary’s Church Hall, Greyhound Hill, NW4. This will be given by Dr. John Alexander, Staff Lecturer in Archaeology at the University of London. His subject is “RESCUE” if which he is a founder member. This is a new trust started by six well-known archaeologists nine months ago, because they were becoming alarmed at the gathering momentum of the threat to our archaeological past. Deep ploughing, the extraction industries with their huge quarries, new housing and road building and other modern techniques have accelerated the destruction of sites. Ours is the last generation that may be able to read the evidence of aerial photography, and the last generation that can do something to save the evidence that still remains. Do come and learn what can be done, and bring all those who may share your interest, so that a bumper audience may encourage those whop endeavour to further the cause of Archaeology.

Members may be interested to have details of two meetings locally in November. The first on 12th November is at Burgh House, New End Square, NW3 at 8 p.m. T.G.H. Jones, MA, will give an illustrated talk on “The Tomb of Tutankhamun” for the Hampstead Branch of the Historical Association. The second, on 17th November at North Finchley Library, at 8.15 p.m. will be given by Susan Swanton on “Pilgrimage to Petra”. This will be illustrated by slides and is one of a series of winter lectures arranged by Barnet Library Services.

On November 6th, Mr. G. Evans will be conducting a river walk along Mutton Brook, as mentioned last month; do keep a note of this date and if possible telephone Mr. Evans so that he may have some idea of the numbers.

The London and Middlesex Archaeological Society’s Sixth Local History Conference will be held at Guildhall on November 2oth next. Mr. W. J. Smith, Deputy Head Archivist to the GLC, will speak on the Resources of the GLC Record Office and their values to the local historian. There will be exhibitions mounted by various local history societies. Doors open at 1.30 and business starts at 2.30. Tickets, priced 30p including tea (always excellent at Guildhall) can be obtained from the Hon Secretary, Local History Committee.

IMPORTANT – since the 21st December is dangerously near to Christmas, the lecture on that date has been postponed, and fresh arrangements are being made for 14th December 1971. Please make a note in your diary to that effect. Time and venue as before – St. Mary’s Church Hall, 8.15 p.m.

With great sadness we report the death, on 25th October, of Jennifer Digby, a member of our Society for the past three years. She served on the Research Committee for most of that time and subsequently on the main committee. An archivist by profession, Jennifer played an active part in many research projects, particularly those relating to her own area of Finchley. She organised the survey of the moat at Manor House, East End Road, Finchley in 1969-70, and had hoped to organise a dig there next year. Last August, she was working on the Roman Hendon Exhibition, and even paid a visit to Brent Lodge dig on 23-24 October. Her presence will be greatly missed by the Research Committee, and the Society has lost a kind and friendly colleague who was also a trained and highly intelligent worker.

Many members will be familiar with the blue plaques put up by the old Hendon Borough Council to commemorate such places as the site of Sulloniacae at Brockley Hill, the old pound at the top of Bell Lane, Wyldes Farm, The White Bear, or the “Abbotts Bower” in Parson Street. The Society is trying to compile a list of these – and any others put up by the LCC or GLC or other borough councils, within the Borough of Barnet. Details and location of plaques other than those mentioned above (some may indicate the former house of a notable person, or site of an historical building) will be welcomed by Mrs. Grafton Green or Mr. E. Sammes.

This exhibition at Church Farm Museum may be counted as a considerable success. The Borough Librarian gives the attendance figure as 2,711 and adds “This is a very high figure, and I am sure your members who worked so hard to make it a success will be gratified by the result.” Some 1,200 copies of the exhibition catalogue were produced, and at one stage, unfortunately, the stencils gave out. Over 20 members joined the Society, some from as far away as Muswell Hill, Wembley and Borehamwood.

A number of objects were brought in for identification. Including an authentic flint flake found in the Garden Suburb, a Roman coin from, the Woodside Park estate and Victorian by-gones from near Ashley Lane. Even a modern button, made from the mould of an authentic coin of the Emperor Postumus arrived!

We would like to record the Society’s thanks to Mr. Butcher, the Borough Librarian, for allowing us the use of both Church House Museum and the Roman objects in the Local History collection, including Brockley Hill material; to Miss McDerby, the Reference Librarian, for her help and encouragement throughout; and to Mr. Todd, Curator of the Museum, for his practical assistance in the problems of setting up, maintaining and taking down exhibits. Our thanks to other organisations and individuals are recorded in the catalogue.

Finally, the Society owes a considerable debt to all the members who worked for months beforehand on the exhibits; and to 21 members who stewarded during the six weekends of the exhibition.

Thirleby Road – Two further trenches were opened on October 9/10 on this site, where 3rd century Roman pottery and a coin had been found in July. The owner kindly allowed his front lawn to be excavated. The area dug was small and the dig began at the end of a period of prolonged drought. The ground beneath the turf proved so hard that trowelling was almost impossible except after heavy watering. Progress was therefore slow. So far, fragments of Roman pottery have been found. The excavation continues.

Simmons Nursery, Nether Street, Finchley – Three trenches were opened in a restricted area at this site, which lies just east of the allotments on the old Brent Lodge estate where we dug last year and found a scatter of 17th century pottery. It was hoped that further evidence for the exact site of the small farmhouse of Warren’s Gift, demolished in 1807, might be found. Unfortunately, one weekend – all that the owner could allow, as the excavation area is in constant use as a caravan standing – proved insufficient to test this theory. We found strong evidence for occupation in the form of a stone-flagged area, a drainage system and successive layers of rammed gravelling underlaid by a stretch of large flint cobbles with a probable open drain running through it; but in those levels levels there were no artefacts earlier than the late 19th century. Earlier evidence may lie beneath the 19/20th century strata, which themselves may represent the yard of the Brent Lodge stables; but it was clear by mid day on October 24th that we would not have time to investigate the lower levels before back-filling. The result was a frustrating dig. The bright thing about it was that 17 working diggers (not to mention a number of members who came to watch) took part. 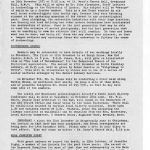 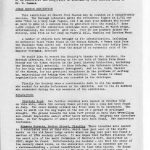