By LWDadminNovember 15, 2015Past Newsletters, Uncategorized

All the above events, unless otherwise stated, will be held at Stephens House & Gardens (formerly Avenue House), 17 East End Road, Finchley N3 3QE, starting at 8pm, with tea/coffee and biscuits afterwards. Non-members are welcome (£1.00). Buses 82, 125, 143, 326 and 460 pass nearby. Finchley Central Station (Northern Line) is a short walk away.

Keith Cunningham is a retired property insurance underwriter in the City. He has been associated with the RNLI in the City for 47 years since having been asked to shake a box for half an hour. In his time Keith has been associated with the purchase of three major lifeboats and his fund raising has been rewarded by the Institution besides the pleasure he and his family have had visiting many lifeboat stations with their crews.

For many years Keith has been a speaker in the London region to schools, youth groups, societies and pensioners first using posters and then moving via photo slides to today’s DVD projection with sound. Keith will speak of the history of the RNLI through to today and the future, interspersed with his experiences.

Gillian’s funeral and reception was held on Friday, 16th October in Redbourn. It was a well-attended event, a mix of happy memories and sad goodbyes. The family have asked that any donations should be made to Barnet Museum and have instituted a Gillian Gear memorial fund. They are holding the Condolences Book at the Museum until 20th November.
http://www.barnetmuseum.co.uk/ and follow the link for more details.

Archaeology on Hampstead Heath Micky Watkins
With thanks to the Ham and High
The controversial Heath Ponds Project to build dams in case of a flood has provided some archaeological finds: Victorian pennies, 18th century pottery and a Neolithic flint. The City of London Pond Project education programme will teach secondary school children about the history and archaeology of the Heath and they will be able to handle finds. We hope adults will be benefitting from this too.

REPORTS ON OUR LYNDHURST TOUR

All Steamed up at Crofton Andy Simpson

After the usual coffee and papers/railway magazine stop on the way down, our first scheduled stop was at the most excellent Crofton Beam engines, Wiltshire, nestling alongside the 81-mile Kennet & Avon Canal opened in 1810 and the Great Western main line to the West Country in the picturesque and tranquil Pewsey Vale, near Marlborough. A lovely surprise had been arranged by Jo and Jim – they were both in steam! Cue smiles and many photos and pixels of moving images. For more info see www.croftonbeamengines.org

The engines raise water from natural springs up to the highest point of the Kennet and Avon Canal, and are maintained and operated by volunteers, occasionally still being called to replace the modern electric pumps when they fail! All the more impressive since they are the oldest working steam engines in the world, still performing the job they were built for. Powered by an impressive hand-fired Lancashire boiler of 1903, one is a 42-inch diameter piston Boulton & Watt of 1812, the other a mere youngster installed in 1845!

After a restful break listening to the friendly guides, watching the engines, eating packed lunches and exploring the canal basin and lock, on the way from Crofton, we caught a brief glimpse of the imposing Wilton windmill (www.wiltonwindmill.co.uk) of 1821 – the only working windmill in Wessex. 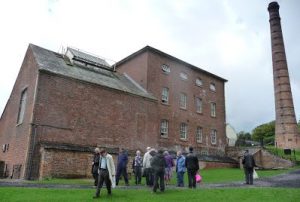 Another obvious feature noticed on the way out of Crofton was a Squirrel training helicopter pretending to be a hedge-hopping tank-busting Apache; http://www.army.mod.uk/equipment/23290.aspx

The Museum of the Iron Age Don Cooper

When we arrived at Andover, Graham, our driver, had to negotiate road works and tight bends to get us to the Museum of the Iron Age. The Museum is based on the finds from the nearby Danebury Hill fort which was dug by Professor Barry Cunliffe in the 1970s. This type-site hill fort dates from 6th century BC and was occupied for 500 years.

We were very fortunate that our guide to the museum was Chris Elmer, an archaeologist and PhD student at Southampton University, who had excavated at the hill fort. After an initial chat putting the Iron Age in context, he guided us around the museum pointing out some of the finds: pottery, worked flints, antler bones as tools, bone combs, quern stones, loom weights, weapons etc. tht had come from the site.

Intriguing were the reproductions of the grain pits (nearly 500 of them) that were dug down into the chalk. They had a narrow neck which was capped to seal the contents, and then bulged out pear-shaped to give substantial storage. There were reproduction dwellings which were intended to give a flavour of life on the hill fort. With a view to our visit to the fort, Chris’ guided tour was very apposite.

There is a Museum of Andover and its surrounds also on the site with lots of interesting exhibits. After thanking Chris, we got back on our coach and headed off to see the hill fort itself.

(with acknowledgement to Wikipedia)

Never let it be said that HADAS members are unhenged. But why did they always put the hill forts at the top of a hill? This did not dissuade our intrepid travellers from yomping up the hill to explore and to enjoy the splendid views of the surrounding countryside, and for some to walk around the ramparts.

The first phase of defences dates from around 550 BC, and consists of a rampart behind a ditch. Chalk rubble fill was used to build the rampart, along with some of the local clay soil. The material was contained by timber, making it a box rampart with a vertical face. The east gateway was a simple 13ft wide gap in the defences with a timber gatehouse (the south-west gateway has not been excavated). At least 50 years after the rampart was first built, it was raised with the addition of more chalk material. In around 400 BC, the third phase heightened the rampart and at the same time the ditch was re-dug. The more adventurous of the group walked around the top of the ramparts.

The area is now managed by Hampshire County Council Countryside Service, who are allowing small trees to grow on the site.
Then back to the coach to complete our journey to our hotel on the edge of Lyndhurst.

Some of the recent HADAS Evening Class activity, is to investigate and publish the medieval kiln remains and pottery from Kings Road and Galley Lane, Arkley. A leafleting campaign has taken place in Kings Road and the surrounding area to see if current residents have turned-up anything in their gardens relating to the kiln. So far we have some promising leads on the geology along the ridge, and some gardens to investigate but no more medieval evidence as yet. However, a resident in Old Fold View has found a dump of material including post-medieval pottery, clay-pipe, glazed-bricks and a small amount of animal bone in his garden which is on the edge of a drainage ditch or stream. The garden faces north and overlooks open land with Galley Lane to the west.

The HADAS Sunday morning team have been processing the finds which include several interesting items from the 77 sherds of pottery and other material. One of the earlier pottery fabrics is the base of a bowl or dish in Tin-glaze ware ‘D’ type 1630-1680 (see photo below), we have 10 sherds of Metropolitan Slipware 1630-1700, a selection of Post-medieval Redwares (and derivatives) 1580-1900 in bowls, jars and tankards. There are some Borderwares made on the white-firing clays of the Surrey/Hampshire areas and Transfer Printed Wares 1800-1900. Other fabrics include Stonewares and various other earthenwares.

There was a small amount of clay-pipe, a bowl of unusual design where the bottom of the bowl is ‘cone’ shaped and on the front of the bowl is a protruding head of a dog or similar creature, thought to be Victorian in date (see photo). A second bowl has the spur stamped C-D with the bowl back-stamped CP, it’s an AO27 type dating to 1780-1820. Other stems are stamped ‘…rrison’ probably Harrison of Highgate, and Andrews of Highgate, clay-pipe manufacturers we are familiar with.

This part of Arkley had several orchards and greenhouses, could this material be related to some ‘market gardening’ activity say mid 17th century to mid 19th century?

In another garden in Kings Road the owners unearthed what looks to be a church bell mould (?), another suggestion was a cloche – we don’t know really! It’s a hefty thing taking up half a pallet, any ideas gratefully received. 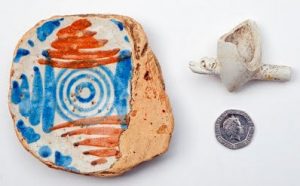 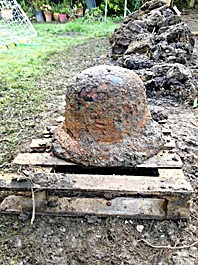 (Above) the base of a bowl or dish in Tin-glaze ware ‘D’ type and the clay-pipe bowl with protruding animal head.
(Right) the iron ‘bell’ shaped object as photographed by the owner.

Why not see for yourself? Jim Nelhams
Our long outing aims to make visits to a number of places, which we hope prove interesting and enjoyable to our fellow travellers. You can make your own judgements based on the notes submitted for inclusion in the newsletters, starting this month. Over half of the group have contributed.

Should you wish for more information on any of them, and particularly if you would like to visit yourself, please contact Jim or Jo Nelhams (contact details of back page). We have notes, and some booklets available to help.

The Bexley Society have made HADAS and other similar societies aware of a recent theft from their on-going site. Small finds, surveying equipment, gladiator style helmet and a table have been taken and reported as stolen.

Proposals by Enfield Council to make cuts / changes at the Enfield Museum have been strongly opposed by John Clark, President of LAMAS in a letter dated 19th October sent to the Chief Executive of the Council.

The interior of St Paul’s Cathedral is home to a number of significant decorative schemes in mosaic, designed by artists George Frederick Watts and William Blake Richmond. As part of a project to research the mosaics in the Cathedral quire, the Cathedral Collections will be hosting a study day at the Museum of London to look at the wider context of the mosaics, examining the nineteenth century revival of mosaics in ecclesiastical settings, the mosaics in the context of the Cathedral’s collections of artworks, models and archives, and the use of mosaics as a tool for social engagement. Tickets to the study day are free but must be booked in advance. To book your free ticket, click here: goo.gl/LYsR36 Simon Carter, Head of Collections, The Chapter House, St Paul’s Churchyard, London, EC4M 8AD Tel. 020 7246 8325 www.stpauls.co.uk

Saturdays 5th & 19th December, 11am-12.30pm & 1.30-3pm. LAARC, Mortimer Wheeler House, 46 Eagle Wharf Rd N1 7ED. Eat, Drink and be Merry – Indulge in the delights of the archaeological archive and join in a visual feast of dining and drinking from centuries past, on a tour. Cost £9. All tours must be booked in advance, via MOL website www.museumoflondon.org.uk/tours or 020 7001 9844

Britain – One Million Years of the Human Story. Talk by Prof Keith Stringer.

The Broadway NW7. The Occupations of Victorian Britain. Talk by Mike Beech.